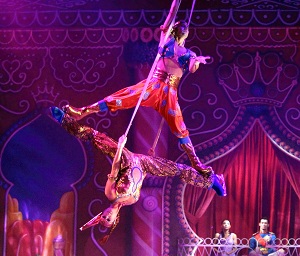 A Reserve Double Passes are up for grabs!

The international ice dance sensation The Imperial Ice Stars make a triumphant return to Australia this winter with a dazzling new production of The Nutcracker on Ice.

Over the last seven years, The Imperial Ice Stars have performed to more than three million people across five continents, at some of the world’s most prestigious venues.

For their latest production, The Nutcracker on Ice, acclaimed Artistic Director Tony Mercer – the world’s leading creator of contemporary theatre-on-ice – has once again teamed with four-time figure skating World Champion and dual Olympic gold medallist Evgeny Platov, and dual World Champion Maxim Staviski to create choreography that further raises the bar, with ever more breathtaking high-speed leaps and throws, and awe-inspiring acrobatics, coupled with the most graceful and sublime ice dancing.

Direct from the award-winning creative team behind the Opening Ceremony of the Beijing Olympics, Opera Warriors showcases the best of Chinese modern theatre arts in a show that tells a story of the Peking Opera through martial arts and modern dance. To celebrate the closing of the Year of Chinese Culture in Australia, Opera Warriors will premiere at the Opera Theatre, Sydney Opera House with four shows only from 14 to 16 June.

Opera Warriors is choreographed by Mr Xing Shimiao, and scripted by Ms Pik Wah Li (Lilian Lee) – one of Hong Kong’s most popular columnists, whose screenplay Farewell My Concubine won the Golden Palm at the Cannes Film Festival in 1993. Mr Sha Xiaolan, the Lighting Designer of the Opening and Closing Ceremonies of Beijing 2008 Olympics, will light the Opera House stage.

Brought to Sydney by the Shanxi Huajin Dance Art Troupe, Opera Warriors is an exquisite visual feast that combines an elaborate set, beautiful costumes, dynamic lighting and original music with a story that encompasses the dramas of life.

Win a Double Pass to:
Nutcracker On Ice at Sydney’s Capitol Theatre or Opera Warriors at Sydney Opera House!

Just email info@danceinforma.com with subject: “WIN TICKETS” and tell us What show you’d like to win tickets to and why. Dance Informa’s Editors will pick the best responses to win.
* Please include your full name, postal address and date of birth.

Competition open until May 24.