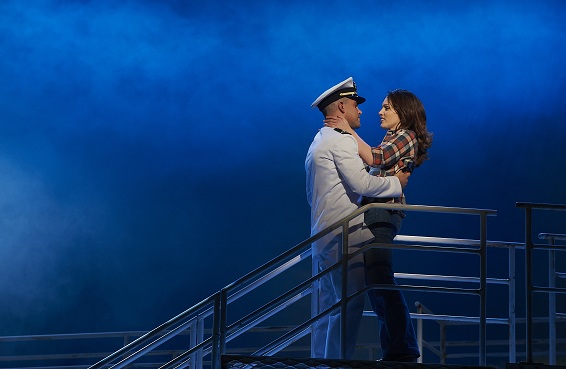 The Lyric Theatre, Sydney
May 2012

A film classic has come to life on stage at the Lyric Theatre, Sydney. The 1982 American drama film, featuring Richard Gere and Debra Winger, tells the story of a U.S. Navy aviation officer candidate who comes into conflict with the Marine Corps Gunnery Sergeant who trains him. Working class heroes Zack Mayo and Paula Pokrifki are able to overcome their upbringing and personal obstacles to achieve their dreams.

Definitely one for the ladies, An Officer and a Gentleman features an athletic cast of handsome Navy recruits who perform an intense, physical dance and drill marathon. Bert Labonte as Sergeant Foley plays the role perfectly, taking the men through their paces and breaking off into song with his powerful tenor voice. His rendition of I’ll Be Damned could easily be considered the standout performance of the show.

Amanda Harrison and Ben Mingay in An Officer an a Gentleman. Photos by Brian Geach

Ben Mingay and Amanda Harrison, in the roles of Zack Mayo and Paula Pokrifki, are a perfect fit for a great love story. Amanda is the most consistently strong in the performance, providing stellar vocals. Humour also adds strength to the production, keeping the audience entertained throughout the opening scenes.

Credit must be given to the choreographer. It must have been a challenge to incorporate a dance and drill sequence to match the sergeant’s commands, but it looks effortless.

The set is what you would expect. Audience members are taken through the confines of a Navy compound and a budget motel, however the special effects are outstanding. The diving scene is portrayed superbly with the scene appearing as realistic as possible.

If you’re after a thoroughly entertaining performance, An Officer and a Gentleman is your match.