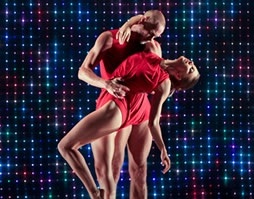 2 One Another is the next contemporary dance installment from acclaimed choreographer Rafael Bonachela, but this time he collaborated with a team of varied artists. Samuel Webster was involved from the beginning, using poetry that was inspired by the dancers’ movement which later became text layered throughout the musical score.  The music was a compilation of artists with original music composed by Nick Wales. There was an eclectic selection with everything from beautiful strings to brash electro.

The costume and production design created by Tony Assness was full of contrast, but easy on the eye. Benjamin Cisterne’s lighting used a number of effects from a dimly lit stage to hits of stark white light. He only mixed in colour in the last section of the choreography.  A cyc replaced with a wall of LED lights covered with a thin layer of fabric softened the overall look.

Bonachela’s choreography held true to his style, despite him having a different creative team for this work. His use of raw movement developed from improvisation is something that many contemporary choreographers only dream of having enough time and funding to be able to delight in! Bonachela’s use of all the elements blended so well, allowing so much light and shade in the choreography.

Opening in silence with almost tai chi like movement, 2 One Another had a peaceful vibe to it. This was then cut by a surge of dynamic movement and light. The whole work ebbed and flowed with a series of solos, duos, trios and group work throughout, with each section having a life of its own.

This work displayed a few different partnerships that seem to be developing within the company. In one duet the contrast of height between dancers Natalie Allen and Andrew Crawford could have appeared as awkward, but it was very complimentary. Once again Chen Wen did not disappoint and his perfectly square arabesque line was enough to make any lover of technique go weak at the knees. His entire solo really showed off his abilities and had an edge to it that made him stand out. Some of the other male dancers seemed to lack the stage presence that is expected at this level of performance; something was missing.

There was a moment where it felt like the dancers were arriving at their destination and that all the elements were going to culminate to end the work, but then there was a new beginning. A whole new section started, with a duo introducing a pop of colour with red draped costumes, and the lightning changing from dim and white light to an array of vibrant colours.

2 One Another delved into relationships and human interaction, which is something we all experience every day. With this work the dancers’ interactions became their own lives recorded in the medium of movement.