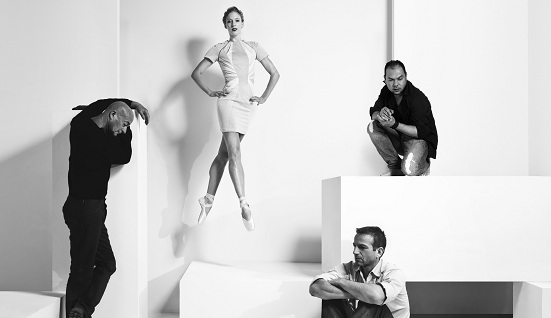 The Australian Ballet’s 50th Anniversary celebrations have begun with a big, beautiful bang. Infinity is a triple bill of new works created by three of Australia’s most important choreographers, to three commissioned scores.

The evening opens with The Narrative of Nothing, from Australia’s beloved Graeme Murphy. After creating a string of lavish story ballets, including 2011’s Romeo and Juliet, Murphy opted out of the constraints of expressing a narrative, returning to a more neoclassical, purely abstract form. During the creative process, however, he found it impossible to NOT find meaning in the steps being constructed, eventually coming to the conclusion that as humans we need – have always needed – stories. The resulting ballet is a 30 minute exhibition of formidable technique, not necessarily always virtuosic in the sense of being grand and showy, but intricate, flawlessly executed and at times lightning-quick. As Murphy noted, in the various groupings of dancers, the audience is free to find its fictions and fantasies.

The Narrative of Nothing is set to Brett Dean’s Fire Music, dedicated to the victims of the 2009 ‘Black Saturday’ bushfires. Powerful in scope and elaborately detailed, the score is expertly rendered by the choreography. The dancers are dressed in unitards which are covered in minute mirrors – an innovative design of Murphy’s long-time collaborator, Jennifer Irwin.

Unexpectedly, the most traditional classical ballet choreography and costumes of the evening are to be found within a piece by one of our most eminent contemporary choreographers. There’s Definitely a Prince Involved is Gideon Obarzanek’s first major work since departing Chunky Move. It asks questions such as ‘what is ballet?’ and ‘what is love?’, drawing on answers collected by Obarzanek when conducting interviews as part of his research. Swan Lake, as the quintessential ballet, is deconstructed and given a realist’s revamp, shot through with candid, sometimes amusing, often nerve-touching narration. Created alongside the choreography, Stefan Gregory’s score manipulates Tchaikovsky’s famous original, thankfully retaining its faultless essence.

The show-stealer of the second work is easily the contemporary Grand Pas de Deux, narrated by Madeleine Eastoe and danced by guest artists Sara Black and James O’Hara. The two bodies writhe and tumble with invertebrate fluidity, reminiscent of the fabulous dressmaker’s dummy in Dame Peggy van Praagh and George Ogilvie’s production of Coppelia.

For me, the piece de resistance of the evening is Stephen Page’s mesmerising Warumuk – In the Dark Night. Inspired by Yolngu families’ creation stories of the night sky, the work explores the ‘spiritual relationship between people, land and nature’. Various myths are interpreted, including those of the Milky Way, the lunar eclipse and the morning star. Dancers from Bangarra Dance Theatre and The Australian Ballet blend seamlessly, the latter embracing a more weighted movement vocabulary. Throughout, the combination of the dance, David Page’s score and Padraig O Suilleabhain’s lighting is nothing short of hypnotic, but it is Jennifer Irwin’s breathtaking costumes which blow my mind, particularly in the dance of the Seven Sisters.

Infinity is a well-balanced cross-section of the Australian dance palette. It incorporates various traditions and our unique Indigenous culture, whilst nodding to the new directions of our choreographers. Here’s to the next 50 years.