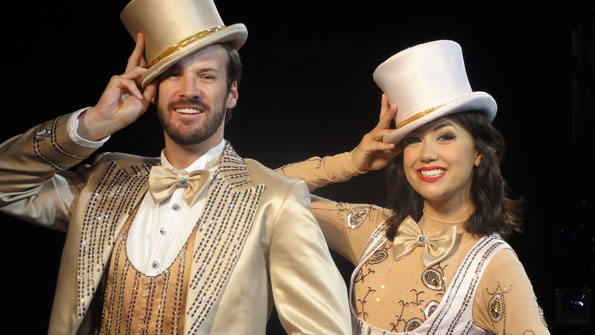 By Rebecca Martin.
Photos and video by Ashley Weidner.

The day before A Chorus Line’s Melbourne premiere, Dance Informa caught up with performers Joshua Horner and Samantha Dodemaide, having previously featured them in the November 2011 issue just as rehearsals were commencing.  Since November, Josh and Sam have completed the show’s Adelaide season and spent a rare day off at the beach on Australia Day.  Cast as ballet dancer ‘Lois’ in the production, Samantha is also understudy for ‘Cassie’, one of the biggest roles in the show, in addition to covering for the role of ‘Moralez’.  Joshua has put in strong performances as the teacher ‘Zac’, receiving rave reviews from both critics and audiences.

Dressed in the iconic gold sequined costumes from the show’s finale, Sam and Josh were energized and enthusiastic about their time on “the line”.  Their roles provided challenges, however, with Sam needing to hone her ballet technique to sufficiently convince audiences that she was a penultimate bun head when playing the role of ‘Lois’.  A graduate of Patrick Studios in Melbourne, Sam’s strengths are in musical theatre, yet she impressed the casting panel enough to give her the role of a ballet dancer.  When off stage, Sam utilizes her strong vocals to provide support to the dancers singing on stage.  Josh’s strengths, on the other hand, are in dancing but he has had to learn to hold a tune in order to belt out One Singular Sensation at the show’s conclusion.

The dancers underwent training specific to the style of dance required in the show and were also challenged by the exacting choreography which allowed little room for error or personal interpretation.  While some days their bodies’ ache, the experience of being on stage in one of the most famous dance shows of all time makes up for any physical pain.  For both Sam and Josh, performing in A Chorus Line has been personally and creatively enriching, and they are hopeful that the production will tour to more Australian cities and be presented overseas.

Watch Josh Horner talk about life behind the curtain:

Tickets to the Melbourne season of A Chorus Line are still available, with the show closing on March 11. A Chorus Line will then travel to Sydney’s Capitol Theatre for 21 performances from July 20.