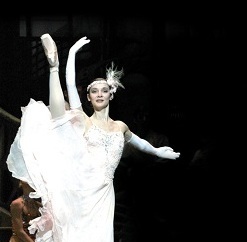 Adelaide Festival Centre will bring some of the world’s best ballet companies and musicals to Adelaide through new Musicals on Film and Dance on Film programs, commencing on February 8 in the Dunstan Playhouse, with screenings throughout the year.

The inaugural Dance on Film series in 2012 will bring some of the biggest companies and most beautiful ballets to the screen. The series begins with the Royal Ballet performing the much loved classic Sleeping Beauty on Friday February 10 at 6.30pm. Be enthralled as Aurora is cursed by the wicked fairy Carabosse, in one of the most famous ballets in storybook classical repertoire.

The internationally acclaimed Paris Opera Ballet performs Swan Lake on April 16 at 11am and Profokiev’s Cinderella on October 19 at 6.30pm. Revel in the strains of Tchaikovsky’s composition as Odette and Prince Seigfried’s doomed love unfolds in Swan Lake, or take in the choreography of legendary dancer Rudolf Nureyev in Cinderella.

The multi-award winning film Life In Movement comes to the Festival Centre on August 2. Life In Movement tells the story of renowned choreographer Tania Liedtke, depicting the rising star and the tragic loss felt by the arts community with her passing. Created by South Australian company Closer Productions, the film is an unforgettable look at creativity and mortality. Prior to the screening, the short film To My Suite will premiere.

Musicals On Film is also a new program for 2012, launching in grand style at 10am on Wednesday February 8 with one of the most popular and awarded musical films of all time, My Fair Lady. The film won eight Academy Awards® and is a verbal, visual and musical feast, starring a suave Rex Harrison and the gorgeous Audrey Hepburn showing off Cecil Beaton’s exquisite costumes.

The second showing in the Musicals on Film program, screened in November, is the classic American musical Show Boat, starring talented soprano Kathryn Grayson, the beautiful Ava Gardner and a charismatic Howard Keel. This cinematic classic from the ‘golden age’ of movie musicals is sure to delight audiences.

The Musicals On Film matinee season will be hosted by ABC 891 presenter, film buff and raconteur Peter Goers and will include gossip about the glamorous, with prizes for lucky attendees.

Adelaide Festival Centre CEO and Artistic Director Douglas Gautier says, “I am delighted to introduce a film component into Adelaide Festival Centre’s program for 2012. The Musicals on Film and Dance on Film series will bring some of the world’s best actors, dancers, and companies to life on the big screen right here in Adelaide. It’s a great opportunity to experience some of the very best performances from the comfort of the Dunstan Playhouse, adding to the live feeling.”