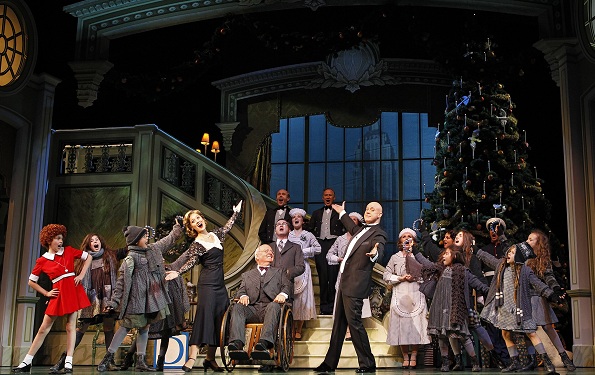 When it comes to a night of quality entertainment, Annie the musical ticks all the right boxes. The timeless tale of little orphan ‘Annie’ caters for both the young and old in a lavish and energetic stage production. Produced by John Frost, this is a classic musical about never giving up hope. Based on the popular Harold Gray comic strip, Annie burst onto the scene in 1977 and has been playing across the world ever since.

With a star-studded cast, the Australian production of Annie lives up to expectations. Anthony Warlow reprises his role as ‘Daddy Warbucks’ after the highly successful production of Annie in 2000. With a stella career spanning diverse performances, it was no surprise that Anthony brought charisma and a thrilling voice to the role. He is teamed with theatrical legend and stage veteran Nancye Hayes, playing the role of villainous ‘Miss Hannigan’, and the ever-versatile performer Todd McKenney, as Miss Hannigan’s con-artist brother ‘Rooster’.

Other standout performers include Chloe Dallimore who brought great comic timing in her portrayal of ‘Lily St Regis’, and Julie Goodwin with beautiful poise and an incredible voice playing assistant ‘Grace’. Even radio shock-jock Alan Jones took a shot at the role of ‘Franklin D Roosevelt’. It was an interesting choice to have Jones play the President, as his accent needed some work, however the radio personality seemed to enjoy himself on stage and carried the audience along with him.

Siena Elchaar took on the role of ‘Annie’. Although she may not have had the strongest of voices on the night, she made up for it with a confident stage presence. Siena was backed up by a group of talented girls who played the orphans. All the girls seemed to carry off their roles with ease, and performed like true professionals. Their performance of ‘It’s The Hard-Knock Life’, choreographed by Kelly Aykers, was a definite showstopper. Ayanda Dladla, who played ‘Molly’ on the night, was adorable and proves to be a great talent already at such a young age. However, if you were to go by the reaction of the audience, then perhaps ‘Sandy’ the dog, was the real star of the show. Each time the dog came on stage the crowd erupted!

The sets and costumes did not disappoint. With each scene, you could see that an immense amount of detail had gone into the use of props, lighting and backdrops, and ‘Daddy Warbuck’s’ wealth came to life with a rather lavish set design to depict his New York mansion.

Annie has it all: a stellar cast, impressive set design and great comic ability. The production was a crowd pleaser, and is definitely one for the whole family to enjoy.