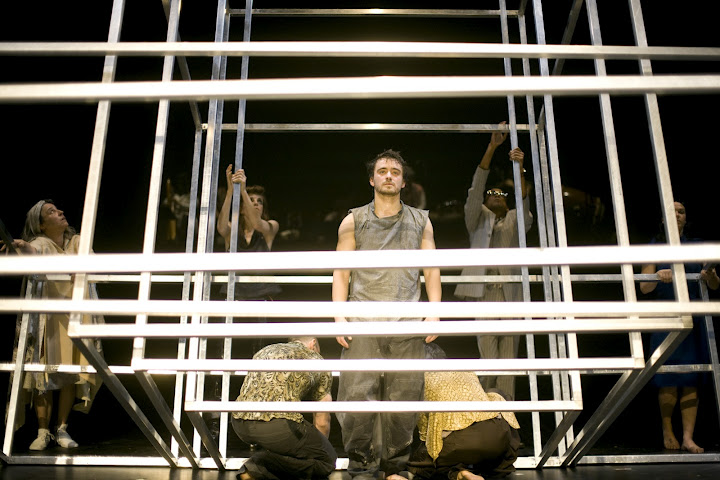 One of this Sydney Festival’s major events, Babel is a mesmerizing and enthralling piece that will leave you gasping.

Two of Europe’s hottest choreographers, Sidi Larbi Cherkaoui and Damien Jalet, bring us an extraordinary company of eighteen dancers and musicians in a powerful, hypnotic, swirling maelstrom of searching for identity and culture.

The driving concept of the work is based on the Biblical story of the building of the Tower of Babel and how language (both spoken and physical) and body emerge as the hidden forces behind all human interaction.

The international language of ballet is French, but Cherkaoui and Jalet combine Western contemporary dance with different movement styles from around the world, including break dance, hip hop, ballet and martial arts in tandem with a haunting and thrilling eclectic soundtrack of rhythm and voice.

The incredible cast throw themselves into the work with amazing energy. Various sections are developed into a vivid chaos of multilingual chatter, with some of it funny and some quite angry. Simple acts are highlighted, like hanging out the washing while singing. At times the casts’ hands are like stars; there is violence but also much fragile, hesitant tenderness.

Highlights include an amazing performance by Ulrika Kinn Svennson. Sooty eyed and incredibly tall, she teeters along in knee high black boots as an exquisite robotic doll. There is a sequence where she is gleefully ‘inflated’ by two Japanese men and in another she acts as a multilingual customs/security guard at the airport.

In one section Darryl E. Woods enters like a conquering king and gives a biting tongue-in-cheek monologue on how the English language has dominated the world. Another sequence looks at mirror/motor neurons and the philosophy of connectedness. In another moment an erudite, philosophical Frenchman gradually becomes a Neanderthal like grunting caveman.

There is a topless, writhing, sculptural pas de deux and some most unusual male pas de deux, one in particular that is based on martial arts. There is a lot of energetic machismo, with the atmosphere at one point like a footy team celebrating. This is contrasted with a piece where after a stunning pas de deux one of the dancers is caught in a cell and unable to escape.

The score is a musical fusion of East and West, with interweaving Hindi beat, dramatic Kodo drumming and haunting lyrical medieval music including flute and harp.

Gormley’s timeless, fragile and versatile set of hardy silver metal frame cubes are at times reflective against the plain black scrim. The cubes interlock, tilt, slide and rotate allowing the cast to build the Tower of Babel.

A stunning, breathtaking analysis of the human condition and the need to communicate.