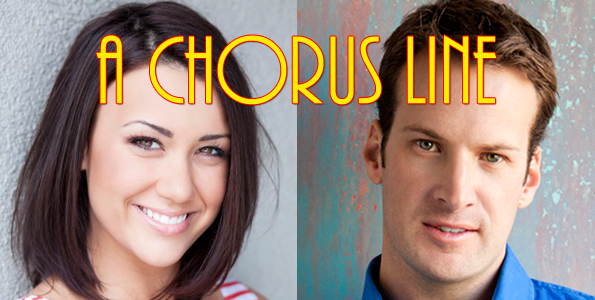 Joshua Horner and Samantha Dodemaide, stars of A Chorus Line.

Direct from Broadway and a U.S. Tour, an all-new Australian production of one of the most successful American Broadway musicals of all time, A Chorus Line, is coming to Adelaide and Melbourne. A notoriously difficult musical for a performer, A Chorus Line demands high energy and everyone must be able to sing, dance and act.  It’s the best of the best in one show.  Audiences are set to be blown away by the talent of the Australian cast.

Hailing from Wyong in New South Wales, Joshua Horner has made the leap from The Australian Ballet to the glitz and glamour of Broadway and television.  Since making the transition into musical theatre, audiences have seen Josh as a judge on Dancing With The Stars, and in productions including Billy Elliot, Dirty Dancing, Tivoli, Movin’ Out, and Guys and Dolls.  With a career that has so far seen him perform on Broadway, in London’s West End, and as a choreographer in Los Angeles, it is with great pleasure that we welcome Josh back home to play the role of Zach in A Chorus Line.

Joining Josh on stage is Samantha Dodemaide, an up-and-coming performer from Melbourne.  At the young age of 22, Sam has already appeared on stage in productions around the world.  From Melbourne, Sam trained at The Children’s Performing Company of Australia, and after graduating from High School, joined Patrick Studios Australia’s (PSA) full time course.  Sam will be featured in the role of Lois.

During breaks in their hectic schedules, Sam and Josh found time to answer questions for Dance Informa readers…

Tell us about your background and training Sam.
When I started I wasn’t much of a dancer (I would say more of a skilled mover), until I met the director of PSA, Todd Patrick! This man was determined to make me the best possible dancer I could be. He yelled, pushed, chased me down the room screaming, told me I could jump higher, turn faster or sing better, and I am thankful every day for his unfailing belief, support and encouragement.  After completing 3 years of the course, I landed my first professional job as a part of the ensemble in WICKED at Universal Studios Japan, where I spent 13 wonderful months. This year I decided to develop my skills some more, and returned back to train full time at Patrick Studios Australia’s new Musical Theatre Course, focusing on becoming the most refined and polished performer I can be.

Sam, landing the role of ‘Lois’ in A Chorus Line must have felt like a dream come true. Has the reality sunk in yet?
A dream come true? Well that’s an understatement! I am still so thrilled and overwhelmed and feel very privileged to be given the honour to perform in one of the most classic and momentous shows. Although I really don’t think it will all sink in until we are standing up in that chorus line on stage in front of an audience! That’s when I will have to pinch myself to see if I am dreaming!

Josh, you’ve been performing overseas for some time now.  Is it exciting to be able to come home and perform in Australia?
I’ve had so much awesome feedback from friends and fans of my work saying how excited they are that I’m back performing.  I’m really not out to prove anything to anyone though.  I’m Josh Horner.  I’ve been a consistent worker in the dance industry my whole life, I love this business and I’m passionate about growing and getting better. I encourage anyone to chase their wildest dreams.  That’s all I did, I had dreams and I chased them.  If I can share my passion for performing with Aussie audiences again then it’s a win-win for all.  I appreciate the opportunity to dance again in Australia, especially with a great cast.

Josh, are you looking forward to returning to the stage after a stint behind the desk on Dancing With The Stars in addition to time spent as a choreographer?
Absolutely.  Well, it is a little daunting.  I made a decision 3 years ago to be done with shows and focus on my own creative ventures, but when I was asked to audition for the show, the inner dancer inside of me was busting to get back to the stage.  It’s also very warming to know I will gain another new musical family. When you do a show you instantly feel a great sense of security and family.  I have missed that feeling.

Where do you call home these days Josh?
Crazy question.  I just turned 32 and I’m still living like a gypsy.  I have a bed in NY, a car in LA, a car in Wyong and boxes of clothes and belongings everywhere.  I think I still have some in London (laughs).  Home is between LA and Australia at the moment.  I have my Green Card so I divide my time and commitments between both countries.

Sam, your bio for A Chorus Line says that you’ve only ever wanted to dance and sing. If you had to give it all away, what other career path would you follow?
I have been asked this question quite a lot, because people are always surprised when I tell them I’ve only ever wanted to be a performer. It wasn’t always musical theatre that I wanted to do. I originally wanted to be an actress in television, movies, and serious theatre. But then one day at a family function someone gave me a microphone…let’s just say it turned out to be a very long night for everyone! So I never really had to think about it, it was set in stone from a very young age. I wanted to spend the rest of my life on the stage, singing dancing and acting! However, if I really had to give it all away, I would love to be involved in casting. I think being a casting agent would be amazing – discovering talent, and helping make peoples’ dreams come true.

You’ve no doubt done your fair share of auditions over the years Josh, how does it feel to be bringing that experience to audiences with A Chorus Line?
A Chorus Line is a must see show.  The show is all about an audition.  You get to meet all the different characters and I think any dancer or non-dancer can identify with every single one of them. I know many choreographers that I’ve auditioned for across the world have held my career in their hands and its exhilarating putting your talent on the line to see if you’re worthy enough for a place in the show.  It’s a great journey for the audience.

Sam, what is it about A Chorus Line that you love the most?
What I love most about the show is that it is the story of my life! It tells the audience the story of every performer’s life! This is what we go through, for that thing we love most in our lives.  A Chorus Line lets us share this love and our story with the audience. Some of the characters in A Chorus Line have very deep and complex lives, but the one thing that keeps them going and keeps them together is their passion for performing. Such inspirational stories are told in the show, not only through words but also song and dance! That’s something special!

As a performer you sacrifice a lot. Has it been worth it Josh?
I’ve sacrificed so many aspects of what people call “normal life” to chase my career – birthdays, weddings, relationships.  You sacrifice a lot as a dancer,  and we spend more time preparing for a performance than actually being in the performance, but it’s something about that moment when you are dancing that is complete magic.  If you ask, “Was it worth it?” Absolutely!

Sam, what has been the most challenging aspect of your career thus far?
There are many challenges choosing theatre as your career path. It is sometimes a hard and tiring life for a performer. When we are not performing, we are usually working long and late hours doing other forms of work which are not very enjoyable. Staying motivated after audition knock backs is a huge challenge.  Sometimes it feels like all you are hearing is “no”, and it becomes difficult to pick yourself back up and remind yourself that at the end of all those “no’s” is a big rewarding “YES!” Impatience is also another challenge. I believe that everything happens for a reason, so when there is a show that’s right for me, it will happen, but it’s hard to remain patient while waiting for that right show to come along.

Josh, what has been the highlight of your career thus far?
To be really honest, I find it really hard to pick one thing.  I look back at my career so far and love it all.  I’ve danced on Broadway and the West End, worked with wonderful creative people, whack in being a judge on a TV dance show and at the same time choreographed a Disneyland parade.  I’d like to think that A Chorus Line will be my new highlight… in fact it probably will be.