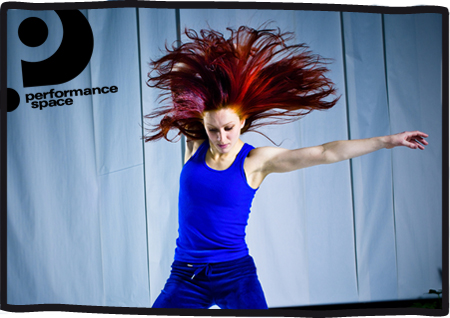 I Left My Shoes On Warm Concrete And Stood In The Rain is an amazing solo work created by dancer/performer/writer Gabrielle Nankivell, who trained in Adelaide and Melbourne. As a producer and director Nankivell has seen her work presented in ten countries across three continents.

It is an enchanting, delightful show, with echoes of warm long lost childhood memories. There is an atmosphere of fairytale throughout and encouragement of our imagination.

Benjamin Cisterne’s designs include a large decorated branch, suitcases, and buckets, and there is much use of wonderful spooky shadows. The show opens with a gunshot and the sound of stampeding horses (possibly establishing the fairytale atmosphere – a prince arriving to rescue Nankivell abandoned in a forest? ) The work is about struggle – the struggle to survive, the struggle to endure dreary day to day existence.

Instructions are given in voiceover for surviving a metaphorical bear attack and a free falling elevator. There is also a suitcase that mysteriously appears with a survival kit enclosed for camping in the imagination. We dance with joy among the fireflies.

Nankivell reads stories to herself by flashlight under a blanket, again harking back to childhood. Text is integral to the show with Nankivell’s mellifluous voice being used in voiceover. Nankivell fluidly plays around with the humour of the text and choreography in parallel with deeper darkness and pathos.

There is also a time warp set on the cobblestones of the Menin Gate war memorial in Belgium. We experience the horrors of trench warfare with bombs crashing around us. In this section Nankivell tensely slithers spider like across the floor, writhing and rolling.

Luke Smile’s soundtrack is a crucial part of the show. It has 3D stereo effects with everything from gunshots and bombs, lyrically humming strings or simple piano notes, through to fast electronic percussive beats. The lighting is also very important. Great use is made of total blackout .Strobe lighting is employed at one point and there is misty fog and shadows. For the bomb/Menin Gate sequence there is a very effective use of side lighting and shadows in the shape of crosses.

The fairytale like theme is continued with a blood in the boots scene towards the end – possibly representing the idea of sacrifice. Nankivell has walked so far and worn out her boots so much that her feet have bled.

Nankivell’s choreography flows like the text, overlapping and interwoven with it. She has a glorious, long stretched line and uses a lot of floor work. Sometimes there appears to be a tai-chi influence. It is as if Nankivell is using movement to write calligraphy in space. Towards the end she is like a plant stretching towards sunlight. Sometimes Nankivell softly, yet powerfully, jumps and lands with a cut in another direction, her body moving seemingly on different planes. At other times her body appears to isolate, articulate and distort with her knees, ankles, toes and elbows curling and moving in opposition with rolled, turned in feet. Returning to the fairytale theme, fluttering fingers are combined with hurtling athletic speed and energy.