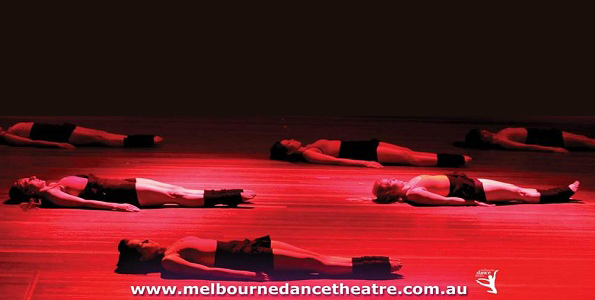 Choreographed and directed by Martin Sierra and Michelle Sierra for Melbourne Dance Theatre and presented at The CUB Malthouse, Heroes is an ambitious work by a young company that proposes to pay tribute to the everyday heroism of survivors of 9/11 by representing aspects of the event through dance theatre. The work engaged with the theme of everyday heroism in 9/11 through choreography representing struggle and anguish. The theme was further brought to life through the scenic device of white blocks manipulated to look like the towers, bricks and debris, and through considered musical arrangement.

Heroes is structured around a series of ensemble pieces, solos, pas de deux and pas de quatre representing frenzied escapes, grieving family and resistance to evil.  The choreography used motifs of falling, running and looking up, and displayed athleticism in falls and floor work, and contortions in leg and upper body extension. The work was highly rehearsed for these technical aspects. Across these sequences the large white blocks were arranged and manipulated by the dancers into different, interesting formations. The dancers would lift them with their feet, stand, dance, sit on and roll over them. Whilst there were moments where the image created by manipulating the white blocks was intriguing, the blocks were a little cumbersome.

I feel that Heroes could have gone deeper in its exploration of the humanity and the tragedy. The thought line of narrative and who the dancers represented was not clearly developed and could have benefited from more dramaturgical input. Choreographic motifs were introduced, but I felt that the dancers struggled to find more than a superficial expression of the themes. Courtenay Ludbrook was an exception. She found not only precision but was able to radiate a gravitas in her movements and expression that was appropriate to the piece.

The musical arrangement for the show was a mixture of popular music, sound composed by Josh Mitchell and a memorable sound score of inhalation and exhalation created by the dancers. The most interesting use of sound was ambient and included emergency reports of the 9/11 incidents.

A subject of such cultural complexity is difficult to render in art without succumbing to cliché.  Heroes was most engaging in a sequence that used the sound of the dancers’ breathing as the soundtrack. It offered a texture of human necessity, and well served the themes of the piece. It was also successful in the more simple moments when the dancers could be present with the themes of humanity and heroism in front of the audience, and were not obscured by the demands of the choreography.