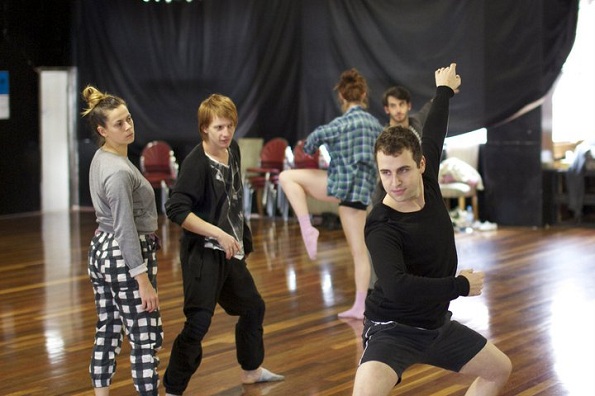 A natural dancer his whole life, and choreographer from the early age of 15, it wasn’t until 17 that Stephen attended his first dance class and has since trained in contemporary, jazz, musical theatre and hip hop as a full time dance student.  By the time he was 23, Stephen had relocated to Canada where he performed with a contemporary dance company in Vancouver that provided the inspiration for the first Vertical Shadows piece.  Upon his return to Australia Silence On These Seeds was created, documenting Stephen’s personal tribulations during his time in Canada.  At first, Vertical Shadows was simply a name to represent the collective dancers that performed in Silence on These Seeds but has since become a fully-fledged dance company that presents regular shows.  Stephen now dedicates his time to teaching and choreographing rather than dancing, as he enjoys the creative process and staging of shows the most.

I spoke with Stephen about the company’s background, his inspiration, and upcoming shows…

Tell us about the company…
The Vertical Shadows style is contemporary jazz with influences from my hip-hop training. I audition different casts for each show as all our shows vary so much in style, but I do have about 4 principal dancers who are in all the productions. We put on 1-3 shows a year, with no set seasons, as I believe in putting on shows when you have something ready for the stage not just because you have to put something on. I will work on the show for a year or two before I audition for it and lock it in for a stage.

We are an independent dance company but believe it is important to pay the dancers. Our dancers get paid their wage whether or not our shows make money. In my opinion, dancers often get the short end of the stick payment wise.

You have spent some time in the US recently, what did you get up to there?
I like to go back to LA and NY to train every year on my way back to Canada to teach summer intensives. Seeing shows is my favourite thing to do. I have seen so many incredible musicals and dance productions while travelling North America. Seeing shows is 50% of your training I believe.

What are your personal influences and inspirations as a choreographer?
I am a huge Michael Jackson fan.  I love how he added such charisma and dramatics to pop music and took influences from old jazz styles and made them modern. I like to think Vertical Shadows brings dramatics to the contemporary dance stage that is acceptable to the general public. We have had an amazing response from both the dance and general audience which suggests Vertical Shadows is on the right track.

You choreographed for the Australian version of So You Think You Can Dance.  Tell us how that experience was…
It was a lot of fun and it is great for a broader audience to see your work. The show does great things for the dancers appearing on it by giving them exposure and experience.  This creates work for them after the show which is amazing. Personally though, I prefer dance to be on stage rather than on television, and in the theatres where it belongs.

You have started choreographing for musicals too, tell us about that…
I’m such a huge fan of musical theatre, and I was very fortunate to have the opportunity to choreograph the Melbourne premiere of my favourite musical Spring Awakening this year. I also got to work with the amazing Dean Bryant and Matthew Frank on their award winning musical Prodigal. I have a few more in the works at the moment for the next few years and I can’t wait to get started.

Tell us about Vertical Shadows’ upcoming show…
Release The Stars is the first show from the company in 2011, and is a triple bill with a cast of 12. I have such an amazing cast in this show and they were really the inspiration behind its theme. We are working with some incredible lighting – I always conceptualize the lighting as part of the piece while making it. It’s important that my cast and I enjoy ourselves during the rehearsal process and on stage, as the one thing we love to do is entertain!

Release The Stars opens in Melbourne August 17 at Theatreworks.
www.theatreworks.org.au/whatson/event/?id=92
‘Friend’ Vertical Shadows on facebook for your chance to win free tickets to their new show!