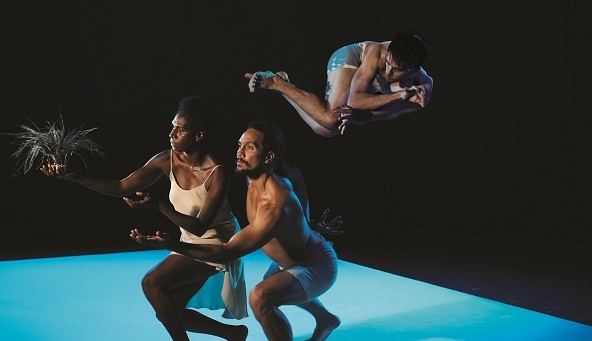 Bangarra Dance Theatre continues its quest to explore the spirit that connects traditional and contemporary culture for indigenous and non-indigenous Australians. The company is not so much about “performance” but rather “essence”; essence of spirit, both past and present.

Dance Informa spoke to Artistic Director Stephen Page and Rehearsal Director Catherine Goss at the Bangarra studios in the fortnight leading up to the opening of their latest program, Belong.

Belong is comprised of two works; ID choreographed by Stephen Page expressing the search for identity in the 21st century, and About by Elma Kris “exploring the winds across land, sea and sky” as she evokes her Torres Strait Island homeland. Page sums up the central theme of Belong, “what lies at the heart of each work is the sense of the spiritual within the actual.”

When asked what the impetus was for Belong, Page explains that it was the opportunity to explore stories and use dance as a storytelling medium for two choreographers who were ready to create something after a period of choreographic downtime.

“Elma (Kris) was always going to do a work this year as she hasn’t presented anything new since Emeret Lu in 2007 and I wanted to entrust her with a work on the Torres Strait Islands. It’s important to nurture her work and give her this opportunity. And it was also time for me to do another work. I haven’t created anything since 2008. In contrast to Elma’s work, I have gone more social and abstract with ID.”

Elaborating on his new piece, Page talks about the mood and ideas behind ID. “I wanted to use positive words to rekindle the stories and connective spirit, to ask the question ‘What is it about 21st century Aborigines?’ –  to compare urban Aboriginals with traditional man; indigenous perceptions with Western perceptions. There are so many urban Aboriginal and Torres Strait Islanders who choose to celebrate their indigenous identity; to reclaim, rekindle or reawaken their traditional heritage. We are apt to romanticise the traditional Aboriginal but I want to bridge the traditional with the contemporary.”

The uniqueness of Bangarra lies as much with its vision as an indigenous-centred dance company as it does with its dancers. We asked which qualities Bangarra looks for when choosing dancers. Catherine Goss Rehearsal Director responds, “in terms of choosing the dancers it’s more about a spirit and understanding of indigenous culture and telling the stories.” One such example is Jhuny-Boy Borja, the only non-indigenous dancer currently with the company but who grew up in Katherine and understands the strong connection with the land and importance of storytelling.

The Bangarra dancers must also have the capacity to mentor and nurture the collective creative form rather than solely pursuing their individual technical ability. Goss continues, “Jhuny-Boy has been with Bangarra since 2003 so he’s one of our senior dancers. We have the cycle of the older ones teaching the younger ones and the younger dancers looking to the more experienced dancers for guidance. We find that the dancers join Bangarra in order to rekindle and reconnect. The majority of them are urban so there isn’t always a strong thread to their indigenous roots. With Bangarra they can really embrace their culture.”

Goss continues, “However, that’s not to say that we don’t require technical dance ability. The evolution has been interesting to watch over the past 10 years. We’re embracing more the technical without losing the essence.”

When asked to define the spiritual sense or experience of an indigenous person Page mentions one’s moral wavelength. “With the environment crying out, there’s a real need for a cohesiveness of the human spirit. People want to belong but Western Society is so concerned with wanting to understand and wanting an answer now. It’s about supremacy and systems. They should relax a bit and just accept, try not to abuse what’s around us and adopt some of the indigenous spirit.”

On asking the same question on a more personal level he chose to respond on behalf of Bangarra, “It’s about a maintenance of the spirit. We’re caretakers of the spirits of our ancestors. It’s about respect for the land which has shaped the people. A diverse land creates a diversity of people, and we respect that.”

Bangarra is a high profile indigenous cultural export and has been highly acclaimed in various countries around the world. The audience response has been overwhelming. “In Germany we received no less than four standing ovations per night, and it was the same at the Kennedy Centre in the US. I think we all have the desire to connect on a different level, on the spiritual level. The audience comes away with history and feels something. In Germany there was an awe-struck silence through the performance and during intermission a mad flapping of pages as they digested the programs.”

We asked Page what he hopes the audience will take with them from a Bangarra performance. “A consciousness, hopefully we’ll awaken their spiritual consciousness, a different aesthetic. Humans have to face many facets of emotional and social struggles, so on the one hand we try to cleanse and heal through our works. And then on the other hand in some of my other works I want to confront but also allow a healing.”

Touring throughout regional Australia allows Bangarra to engage with various indigenous communities.  Goss outlines the active involvement of Bangarra.” We have an education program which involves workshops with local indigenous school children when we do our regional tours. The dancers are effectively mentoring these children and showing them the possibilities for a creative career”.

Added to this is Bangarra’s Dance Safe Program that provides a structured approach for the dancers’ strengthening and rehabilitation in order to minimize disruptions caused by injuries. Goss oversees the program and explains. “Australia leads the world in terms of dancer care and Bangarra decided to have a more formalised program rather than calling physios when dancers needed them. So now, we have a physiotherapist on board three hours per week and a massage therapist once a week. Even when we’re on tour we ensure we have access to physios and massage therapists.”

Bangarra Dance Theatre continues to flourish with the recognition that it has definitely come of age. Asked if he was happy to continue after 19 years at the helm Page says “nothing’s shifting me at the moment…and there is a strong cultural purpose. Time will tell…when the spirit moves”.

Like the winds that sweep across the sand, sea and sky get ready to experience the spirit of Bangarra as they tour both nationally and internationally.