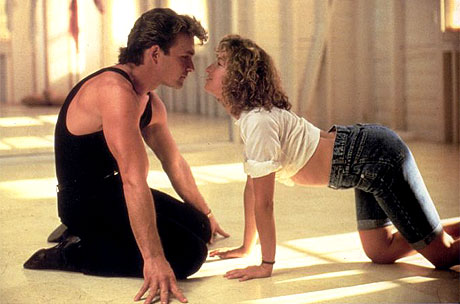 We all need a little inspiration, or sometimes just a little entertainment as we snuggle up on the couch on a cold, wintry weekend.  So gather your dance friends, some popcorn and these dance movies, for a night of fun. Who knows, you might even learn a move or two?

Enjoy this two-part series looking at some of the best dance movies in motion picture history.

Swing Time (1936)
No dance movie list would be complete without a mention of Fred Astaire and Ginger Rogers. Swing Time is considered by many to be one of their best. Beautifully directed by George Stevens, and with dance numbers choreographed in collaboration with the great Hermes Pan, this film is the perfect showcase for the melding of tap, ballet and ballroom, made famous by Astaire and Rogers.

The Red Shoes (1948)
Based on the Hans Christian Andersen fairy-tale about an enchanted pair of red ballet shoes, this film won two Oscars and was nominated for three more. It is a tragic story of love, manipulation and obsession – themes which are echoed, 63 years later, in Darren Aronofsky’s Black Swan.  Starring Moira Shearer, Leonard Massine and Robert Helpmann, The Red Shoes is a must-see for lovers of either dance or great movies. Apparently it’s one of Martin Scorsese’s favourite films too!

Singin’ in the Rain (1952)
Surely one of the greatest movie musicals ever made, Singin’ in the Rain was choreographed and co-directed by the one and only Gene Kelly. Dancing alongside him are Donald O’Connor and Debbie Reynolds. Cyd Charrise makes a wonderfully slinky appearance in one of the best dance sequences in the movie, Broadway Melody Ballet. Other classic scenes include the ground-breaking title number, as well as Good Morning, Fit as a Fiddle and Make ‘Em Laugh – which showcases O’Connor at his best.

West Side Story (1961)
Directed by Robert Wise and Jerome Robbins, West Side Story won 10 Oscars, including Best Picture. Adapted from the highly successful Broadway musical from 1957 (also directed by Robbins), it retells Shakespeare’s Romeo and Juliet. Verona is replaced with New York City, and the warring families are instead two street gangs, the Jets and the Sharks. 50 years on, the staging and choreography of West Side still looks innovative – this film was ahead of its time.

Saturday Night Fever (1977)
Before he was Danny Zuko in Grease, John Travolta starred as Tony Manero, the streetwise disco king from Brooklyn. The famed soundtrack, composed and performed mostly by the Bee Gees, became the best-selling movie soundtrack ever, and remained so for 15 years after the film’s release. Against the glitz and glamour of the disco world, the story of Saturday Night Fever is pretty dark,  involving racial conflict, violence and depression. Travolta landed an Academy nomination for Best Actor for his role.

The Turning Point (1977)
Nominated for 11 Oscars, including Best Supporting Actor for Mikhail Baryshnikov, The Turning Point reflects on the choices we make through life, and the dreams we sometimes cannot fulfil. With amazing performances by Anne Bancroft and Shirley MacLaine, and featuring artists of the American Ballet Theatre, such as Lucette Aldous, Peter Martins and Suzanne Farrell, this is surely one of the best ballet movies ever.

All That Jazz (1979)
This is a semi-autobiographical story, directed by Bob Fosse. Perhaps the greatest jazz choreographer of all time depicts himself – through central character Joe Gideon – as an over-worked, substance-addicted womaniser, in the pull of a downward spiral. With its fantasy elements, disjointed sequences and graphic medical scenes, All That Jazz is not for everyone, however if you’re a Fosse fan, it’s a must see.

Nijinsky (1980)
This film tells the story of Vaslav Nijinksy, his relationship with the controlling impresario of the Ballets Russes, Sergei Diaghilev, and an eventual descent into madness. It is said to be based on biographical fact, using Nijinsky’s personal journals and his wife’s book, Life of Nijinsky, as its main source of research. It is directed by Herbert Ross, who also directed The Turning Point, Footloose and Dancers.

Flashdance (1983)
With its leg-warmers, big hair, step-ball-changes and legendary soundtrack, this cult film IS the 80s. Jennifer Beale stars as a welder by day, exotic dancer by night, with dreams of training at a prestigious ballet school. It’s cheesy in all the right ways, and scored a load of awards and nominations in its day (mostly for music and editing), despite being panned by many critics.

Footloose (1984)
Based loosely on events which took place in a small town in Oklahoma, Footloose is a classic story of teen rebellion. A very young and agile Kevin Bacon stars as a city kid who moves to a small town – one that has banned dancing and rock music. Among its many great features are one of history’s best ‘angry dance’ sequences, a cracking soundtrack, and even an appearance by Sarah Jessica Parker. Look out for the remake, which is due for release in October 2011.

Breakin’ (1984)
As far as films go, Breakin’ is pretty flawed, but features some awesome popping, locking and breaking, from a time when these styles were just being developed. A must-see for today’s b-boys and b-girls, this film was inspired by the German documentary Breakin’ and Enterin’. Ice T makes his cinematic debut in this one, and keep your eyes peeled for Jean-Claude van Damme!

A Chorus Line (1985)
A stylised depiction of the audition process, this film doesn’t really live up to the Broadway show version, although it is fun. It features a young Michael Douglas, some super high-cut leotards and a lot of over-acting. Classic numbers include I Can Do That, Dance: Ten; Looks: Three and the  impressively gold-lycra clad finale, One.

White Nights (1985)
This movie is another vehicle for the great Mikhail Baryshnikov, this time co-starring with Gregory Hines, Helen Mirren and Isabella Rossellini, with choreography by Twyla Tharp. If you haven’t seen White Nights, check out www.youtube.com/watch?v=02EvsGal-Wc&feature=related for a taste of its brilliance.

Dirty Dancing (1987)
You’d have to have been living under a rock not to have seen this one! The late Patrick Swayze is magnificent as dance instructor Johnny, teaching the young ‘Baby’ a thing or two – including some new, sexy dance moves, and possibly the most famous lift ever seen in a movie. The soundtrack is a classic, and includes some hits which are now favourites at karaoke bars the world over. Dirty Dancing spawned a 2004 prequel, Dirty Dancing: Havana Nights, as well as a highly successful stage version.

Dancers (1987)
Mikhail Baryshnikov, Leslie Browne, Alessandra Ferri and Lynn Seymour star in this movie about a ballet company rehearsing for a production of Giselle in Southern Italy. Critics’ reviews were, in short, caustic, but as ballet lovers, we’re prepared to turn a blind eye to a dodgy script and some under-developed characters, in the name of beautiful dancing – right?

Tap (1989)
Gregory Hines stars as Max, a dancer who, through lack of opportunity, has turned to crime. As with many dance films, it’s generally agreed that the storyline is fairly lame but the dancing is awesome. Gregory Hines was the most incredible tap dancer of his day, and if that’s not enough, Tap also stars Sammy Davis Jr, in his last screen appearance.