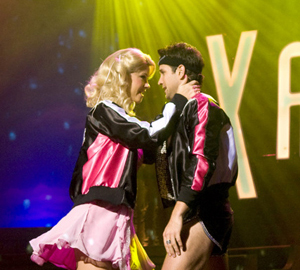 My knee-jerk reaction to the idea of Xanadu was a vague one of undefined distaste. The cult movie on which the show is based was a little before my time and I knew nothing about it. The said undefined distaste was probably related to the promotional material. I had caught one glimpse of the glaring hot pink, rainbow-clad extravaganza of a poster and shuddered. Little did I know that Xanadu the Musical had its tongue firmly in its cheek, and everything was going to be just fine.

The story, in case you’ve not seen (or have blocked out) the movie, begins with Sonny, a gifted artist struggling to find his voice, disillusioned by his day job. Enter Clio, a Greek muse direct from Mount Olympus. In some kind of administration error, Clio finds herself not in Venice, Italy, 1780, but Venice Beach, LA, 1980. Like any good muse would be, Clio is determined to inspire Sonny, so she disguises herself by donning roller skates and an Aussie accent, and by changing her name to Kira. Her mission is simple: to help Sonny achieve “the greatest artistic creation of all time” – the first roller disco.

Yes it’s the most unlikely premise ever, but it works. The script is fast-paced and funny, cheesy and camp in appropriate proportions. The soundtrack, performed by a band sharing the stage with the actors, is catchy. Kelley Abbey’s choreography is clever and flawlessly executed by the small cast. I’m sure I’m not alone in wishing the joyful roller disco finale, complete with what may be the biggest mirror ball known to man, had gone on for a bit longer. 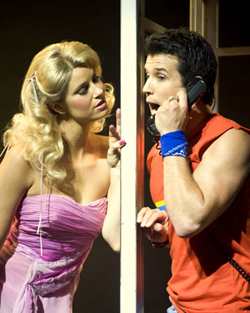 Christie Whelan as Kira is beautiful, talented and funny, clearly winning the hearts of the audience with her first entrance. She has an amazing voice, which bears an uncanny resemblance to Newton-John’s. Whelan made her musical theatre debut in 2005 in Grease – The Arena Spectacular. She is definitely one to watch, having won the Sydney Critics’ Award for Best New Actress as well as being nominated for both the prestigious 2010 Helpmann and Green Room Awards.

The leading man, Sam Ludeman, steps up to the role of Sonny and is well-matched for Whelan. Ludeman is a graduate of Ballarat Academy of Performing Arts and comes to this role directly from finishing up with Fame the Musical.

Ludeman had a certain advantage to his role in that he had previous skating experience. He told me “even though I used to skate a lot when I was younger, and I felt fairly confident, there’s the element that you might fall over, and that’s a bit scary in front of 2000 people!”

Of her skating abilities, Whelan says, “there have been good days and bad days. Sam was already a pro so the bad days were mainly mine. The skating is just one of those things that you don’t have a lot of control over, so you kind of come out going ‘well, here’s hoping…’.”

A highlight of the opening night performance was having the original Kira, Olivia Newton-John, grace the stage. She introduced the show with a speech, drawing attention to the Olivia Newton-John Cancer and Wellness Centre, to which the previous night’s charity performance had been donated. She then joined the cast onstage for the reprise of the title-track finale, resulting in a standing ovation from the crowd.

Whelan and Ludeman were understandably humbled by Newton-John’s presence. “She’s a true star,” says Whelan. “Having her around and involved is just an honour. She gives so much love and light to us in the cast. She’s happy for us, she’s supporting us, and that’s just a beautiful thing.”

You don’t get the accolade of being ‘cult’ if you are everyone’s cup of tea. The creators of Xanadu The Musical have taken the best bits of the film (namely the soundtrack, the outrageous premise and the setting) and created something new; something which doesn’t take itself in the least bit seriously. Says Director Christopher Ashley, who also directed the Broadway debut, “the tone of it is absolutely committed ridiculousness”.*

Whelan agrees. “The script is completely taking the ‘mickey’ out of the movie – it takes everything that was bad about the film and makes it funny. People really relate to it. You don’t have to be a Xanadu fan because all the gags are just there, they’re so funny. It’s so much fun. Movie schmovie – it’s all about the stage show now.”

* Quote from Your Neon Lights Will Shine by Karl Quinn, The Age 4/3/11