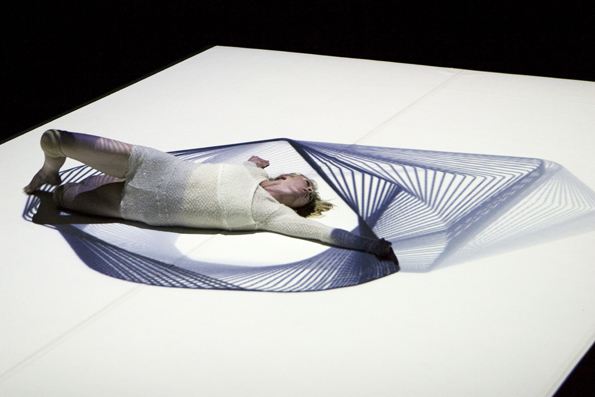 The rise of the machine on stage

A pas-de-deux with a strange responsive motion-sensing machine. Dancing with a shadow that responds and moves in its own time. Moving through a forest of strobe lights.Performing with 240 volts strapped to your body. What is it like dancing on a stage where the other most important component is a sensitive and responsive….machine?

These possibilities make the stage an increasingly magical and illusory place.  Technology changes the way audiences view dance, the way the artistic director conceives the performance space, and of course how the dancers dance. And as technology develops it in turn challenges dance to use and incorporate its capacities into the artistic vision.

Melbourne-based Chunky Move is one contemporary dance company fascinated by developments on the technological frontier.  Two of their famous works, Glow and Mortal Engine, incorporate a high technological component. Collaborating with technologist Frieder Weiss, these works challenge our conception regarding emotional and spatial relationships within dance. 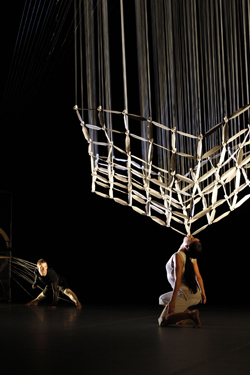 The company’s recent world premiere of their new work Connected also explores the use of technology on the stage. Connected, to be performed next in Sydney this May is a collaboration with the talents of American kinetic sculptor Reuben Margolin where the dancers perform with his suspended mechanised sculpture. The dancers build their performance while constructing the vast sculpture in real time, beginning with simple movements and hundreds of tiny pieces. Over time these basic elements and simple physical connections quickly evolve into highly sophisticated structures and complex relationships.

Artistic director Gideon Obarzanek states that working with technology means his “choreography has focused […] more on abstract and imagistic ideas.” He is quoted as saying, “I use technology to create impressions of other layers we cannot see but which we feel…”[1]

So what is it like to dance with a machine? I spoke with dancer Kristy Ayre who has been with Chunky Move since 2002 and was integrally involved with the creation of Glow, working with Gideon Obarzanek and Frieder Weiss.

Before Glow had you performed a work that included technology as an equal partner?
I had performed Lucy Guerin’s Melt which used video projection. But technology has been used in contemporary dance for many, many years…it just seems that people are more aware of it now and Glow certainly took it to a different level.

What was your first impression regarding the idea of dancing with a work involving a large and dynamic technological component?
So excited! Working with Frieder was exciting and it was so magical…felt like I was 5 years old because you play with it (the technology).

You dance with it but does it dance with you?
YES! Normally you don’t get that type of marriage. It was a total pas de deux.

What is the emotional dynamic of dancing with an inanimate object?
We had six weeks to make Glow with Frieda and I remember being driven emotionally by the physicality and the sound which is just amazing…and the system. It all contributes.

The performance appears as emotionally exhausting as it is physically exhausting. Where do you find the emotion in Glow?
It’s a journey without a narrative but there is a physical evolution and the physical exhaustion generates emotion. It was designed to be performed in an intimate environment and is best performed in a steep, close performance space so that you feel the energy from an external source, from the audience.

What attitudinal and technical qualities do dancers need to bring to perform well with technology?Awareness and consciousness. It feels like another strong component.

Where do you as a lone dancer find the timing?
There are certain cues but I’ve been dancing Glow for years so I start and it varies depending on the night. There is a certain level of freedom within constraints but it unfolds and I move through the six scenes.

Can you remember how you felt at the end of your first performance of Glow?
Exhilarated! Due to injuries I had been pulled from the opening show (August 2006). I basically had a broken leg and I just kept trying to do it. Gideon eventually had to tell me to stop. So my first performance of Glow wasn’t until November 2006 when we performed it in Poland. It was very emotional as this was Gideon’s home country and I was back after injuries. When I finished I felt fabulous and like it was a triumph for me. It’s such a special piece to perform and I never tire of it.