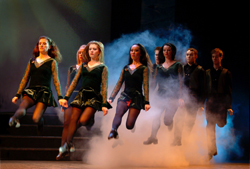 After it’s mind-blowing debut 17 years ago, Riverdance has stood the test of time and it’s exuberant performers continue to boast an inexorable spring in their step! Starting out as an interval act at the 1994 Eurovision Song Contest, the relatively unchanged show has become an iconic representation of Irish culture and a worldwide phenomenon. Australian audiences can now embark on a joyous and whimsical journey to the other side of the world as Riverdance brings with it Ireland’s most talented dancers as well as performers from Spain, Great Britain and the USA.

The Gaelic lyrics ‘Rí rá agus ruaille buaille’ can be translated to ‘noise and commotion’, which serves as a forewarning to the thunderous machine gun footwork that the Riverdance ensemble unleashes on the crowd. With incredible precision, the dancers open the show dressed in sparkling emerald green in ‘Reel Around the Sun’. The celebratory opening number sets the tone for the rest of the show and highlights the importance of nature in the retelling of the historic story of the Irish migration to America.

Interwoven between the frenzied footwork, the Riverdance Band keeps the energy up with equally vibrant performances using traditional instruments including the fiddle, saxophone, Uilleann pipes and drums. In contrast, the vocal work of the Riverdance Singers echoes throughout Sydney’s Capitol theatre with a purity and fragility that is hauntingly beautiful.

Although there are four different styles of Irish dance, Riverdance has made hard shoe Irish step dancing famous as it’s primary style. Drawing attention to their precise footwork, the dancers’ arms remain firmly by their sides, heeding to ancient Catholic attitudes where the dancers can’t interact with one another. However, Riverdance proves that it is anything but outdated with it’s flirtatious young lead, Padriac Moyles, tantalizing the audience with his expressive performances. The juxtaposition between new and old was brilliantly showcased in Scene Twelve ‘Harbour of the New World’ as the male Step Dancers competed in a “tap off” against the effortlessly cool Riverdance Tappers. The audience cries of disbelief at the sheer intricacy and speed of Moyle’s footwork showed us why Riverdance has so successfully sky-rocketed Irish dance’s popularity and its relevance in today’s society. Moyle vocalized his joy of dance by whooping and laughing as he performed and displayed star quality as he follows in the (very fast) footsteps of Michael Flatley, who still holds the world record for achieving 28 taps per second.

Broadening it’s horizons, the show also displays two smouldering performances by Spain’s Rocio Montoya. The Flamenco dancer overtly breaks the rules regarding on stage fraternization, displaying a strong feminine prowess as she stamps around five male dancers and herds them around the stage.

As the moon rises on the final dance number the dancers portray elfin characteristics with their long hair, floaty costumes and incredible agility as if inspired by a J.R. Tolkein novel. Riverdance embraces the fantasy of Irish folklore and the themes of magic and nature interlaced throughout the entire show will enthrall adults and children alike. Moving in perfect unison, the performers continued dancing well after their bows and showed no sign of fatigue; instead they beamed with satisfaction and pride. This tenacity is what has enchanted audiences for the past 17 years and is what makes Riverdance the timeless masterpiece it is today.