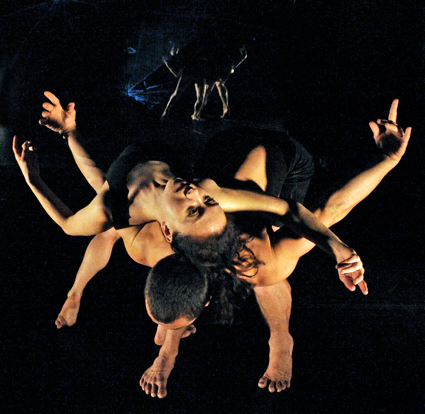 Narelle Benjamin’s In Glass is a study of the mystery of reflection. It’s a consideration of our relationship with the thin barrier keeping us, and the rest of the world, separate from the reflective world beyond.  At times beautiful, at times confronting, this is a work that deserves a serious viewing and in turn, offers genuine intellectual reward for the viewer.

The dance partnership of performers Paul White and Kristina Chan and the concept of the mirror comprise the central elements of this work. Mirrors, after all, come in many forms; they may be fashioned from glass or water, or discovered in the eyes of a soul mate. Whilst states of ‘in-between’ often elude apt description in the form of words, the abstracted and more subjective world of dance provides the perfect medium for this kind of exploration.

On a stark and sparsely-lit stage, with only a few carefully-arranged mirrors as a backdrop, the agile bodies  of Chan and White move through an exceptional range of spatial planes. Twisting, lifting, twirling, rolling and writhing, the duo frequently cast diagonal lines and curves with their movements, literally embodying states of transition and transformation. References to myth and fantasy are alluded to through the developed use of intricate hand and finger movements, as well as through surreal images projected on to the mirrors in the background.

The soundtrack to In Glass is reminiscent of reverb. The concept of delay and echo as a type of distorted mirror appear to be reinforced by the slow, smooth canonical movement sequences between Chan and White. These sequences also serve to draw attention to the striking dance chemistry between the pair – the original inspiration for this work. The boundary between Chan and White is blurred, metaphorically through dance, and literally in a memorable image imprinted on the back mirrors.

The role of light in shaping our reflected images and in turn, our sense of self is not overlooked. It is carefully handled through the artful play of light on water through images projected on to the backdrop, and taken further through both the choreographed reflection of studio lights by the performers and Chan’s costume transformation from a black to a semi-transparent, shimmering silver dress.

The studied and intellectual nature of this piece will suit veterans of contemporary dance viewing. The sheer variety of perspectives from which the concept of reflection is observed by Benjamin is dizzying. Newer initiates to the world of dance, however, may find themselves out of their depth, due to the abstracted nature of both the subject matter and its study in this work. Though certainly not offensive or aggressive, In Glass does contain images of partial nudity which may ward off more conservative viewers. But for those with the desire and maturity to engage with and be engaged by the puzzlements of human psychology through movement, this will prove to be a performance work of the highest calibre.