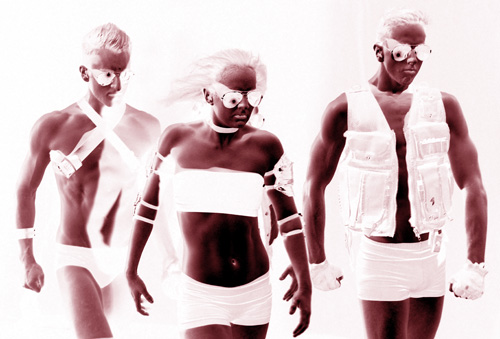 Collaboration the Project’s latest work started with a bang.  Or almost didn’t start!  At the last rehearsal before opening night, one of the performers, Monique Dawes injured herself and was deemed unable to perform.  A frantic email was sent out from the company’s publicist to inform us that due to the complex nature of the choreography, the season would have to be postponed.  Fortunately for all involved, at the 11th hour, a replacement was found, and Stratagem opened only one day later than scheduled.

It was not hard to see how one could get injured performing in this piece, as it was violent, intense, relentless, fearless and chock full of complex choreography.  Full credit must go to Amy Vaughan who pulled off the seemingly impossible task of not only learning the work in one day, but performing it as though each movement was as natural and familiar to her body as walking.  Credit is also due to Kim Adam and Ashleigh Perrie who worked all day in order to get the production onto stage.

The premise of Stratagem centred on a virtual reality game show that had swept the globe.  Each week, the program saw four contestants “battle the virtual prowess of the mind in heated combat challenges for the chance to win six million dollars.”  In a theme reminiscent of The Matrix, the contestants were plugged in, yet no matter how real the simulation appeared, no harm could come to the players.  A virtual death created a re-setting of the program and the next challenge would begin.

This was a bold subject for a contemporary dance company, particularly one that is renowned for Paul Malek’s incredible lyricism and fluid choreography.  Stratagem was a stark departure from Malek’s previous works with Collaboration that addressed more traditional themes of love and sex.

The piece started promisingly with the sound of thunderous drums and the arrival of the dancers in costumes reminiscent of WWF fighters mixed in with 80’s glam punk.  The choreography was massive and the stage was not, so I would like to see this type of production in a more appropriate setting in order to give it the space to breathe that it deserves.  At times the flurry of movement and the sheer intensity of the choreography, coupled with the furious pas de deux, made the dancers seem larger than life.

The strength and stamina of the dancers was astounding.  Their energy never faltered despite the majority of them being on stage for the full duration of the 45 minute show.  Gone was the dream-like beauty that Malek has made the audience accustomed to, and in its place was a far more daring piece that succeeded in pushing the boundaries of contemporary dance, albeit with a few obtuse and clunky moments of choreography due to excessively angular shapes.

The piece worked when the intensity was at its peak, such as the scene with strobe lighting and the entire company performing in unison. The effect was mesmerizing.  However, Stratagem began to lose a little steam towards the end as the ferocious battles that were so compelling gave way to melodramatic faux death scenes and the use of screaming from the dancers.  The beauty of contemporary dance is that movement can be the storyteller, and I feel that the use of pantomime is unnecessary.  In a piece like this when so much can be interpreted from a single movement, it can be best to show, not tell the audience what you wish to convey.

Nonetheless, Stratagem was atmospheric, exciting, daring and provocative. It proved that Collaboration the Project is absolutely vital to the Australian dance landscape.  We need more artists willing to be this daring and more choreographers as talented as Malek to pull it off.