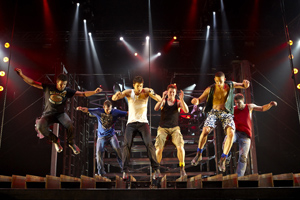 Exploding onto the stage at Sydney’s Capitol Theatre are six sexy blokes in their trademark Blundstone boots, tapping out rhythms Aussie style with industrial strength and force. It’s the return of Dein Perry’s Tap Dogs, one of Australia’s most successful theatrical exports. Back home to celebrate their 15th anniversary, Tap Dogs has withstood the test of time and is more dynamic now than when it first began.

Creator and choreographer, Dein Perry, has given tap dancing a unique Aussie flavour that was warmly welcomed home by the audience on opening night. The show is 80 minutes of hardcore tap cleverly delivered with great humour and brilliant tricks, moving tap away from its traditions and into the unexpected. Leading the pack is Adam Garcia, star of the film Bootmen and judge on the hit UK television show Got to Dance. Garcia reprises the role of the Foreman. He is casually dressed in jeans, a singlet and surprisingly a refined blue collared shirt instead of a chequered flanny that is synonymous with Tap Dogs. He opens the show with a strong solo and intricate crisp footwork that leaves you wondering how he can produce such fast and light beats with heavy workman boots. It’s not just about fast tapping for Garcia who also excels in a slow tap duet with Richie Miller that is delivered with amazing tonality and control.

Nigel Triffitt’s set design is like a playground for the dancers. Each of them helps construct the set from moving the floor and pulling ropes to erecting scaffolding, which requires great strength and stamina. The lighting design by Gavin Norris creates dramatic effect and the rock music scores of composer Andrew Wilkie are delivered with powerful force by two female drummers/percussionists; Lyndsay Evans and Genevieve Wilkins.

On stage it isn’t just the angle grinders creating sparks, but also the brilliant feet of tap technicians Sheldon Perry, Matt Papa, Donovan Helma, Jesse Rasmussen, Richie Miller and Adam Garcia. Their loud beats can be heard on different surfaces from timber, steel beams, the stage itself, and even electronic music pads that produce a fun sound when tapped on.

Overall, the Tap Dogs attack their dancing with fearlessness, strength and confidence, jumping on ramps, tapping on ladders and creating complex rhythms while balancing on narrow steel surfaces. Taking tap dancing to the extreme, Sheldon Perry performs an amazing tap solo while suspended upside down! Another highlight, led by the cheeky Jesse Rasmussen (2009 Australian So You Think You Can Dance top 20 finalist), is a sequence using an unexpected instrument; a basketball. The boys create cross rhythms bouncing the balls with the greatest of control in between their tap dancing beats.

It’s easy to enjoy a performance when the cast is also enjoying themselves on stage. Revolutionising tap dancing with its distinct Australian style, there’s no doubt this highly entertaining show will continue to achieve ongoing worldwide success.