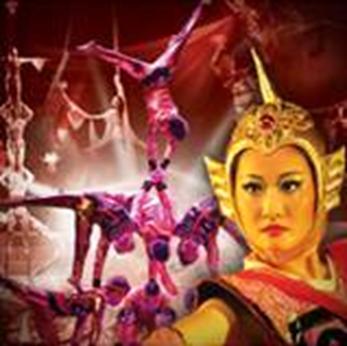 Rarely has an evening at the theatre been so thoroughly provocative. Mulan is nothing if not intriguing.

The positives are obvious as the stage abounds with all manner of acrobatic wizardry. Spectacular, athletic, intensely technical tricks are performed with high tempo martial precision; and all to a resounding soundtrack. The lighting effects are subtle and often quite beautiful, the costumes bold and colourful and the heroic set simple in all its constructivist glory. Accordingly, the audience clapped along and gasped in time.

But – and it’s a big but – you can’t help but wonder what all this somersaulting showiness is for. Before long it becomes clear that Mulan represents the victory of spectacle over content. Sure, director Wang Yafei and her well drilled troupe have based this supposed ‘tale’ around an ancient Chinese myth but what shines out is not the story of a young girl joining the army in place of her father but a kind of overbearing triumphalism.

Mulan celebrates militarism and militancy. It places technical perfection above individual expression and unashamedly shows off the power of the State. If this show had originated in North Korea we would all be gasping in horror at the hubris of a mad dictatorship rather than applauding the leaps and bounds of the obviously brilliant acrobats. Stalin would have loved it.

A very smart Roman once suggested that the key to everlasting power was bread and circuses; and this show is the modern Beijing equivalent -party approved and ready to take your mind off the fact that granny just got shipped off to the gulag.

In addition to celebrating the infinite glory of the Dear Leader, Mulan is also a veritable mountain of corn. It’s like McChina: a flashy, spangly Communist Party cheeseburger. I mean, really – baton juggling? Haven’t we all seen dreadlocked hippies doing that?

Interestingly, when the curtain finally came down the applause was … well, kinda five and a half out of ten. Seems it wasn’t just me who found all this spectacle hollow. Sorry Emperor, but it looks like we’re not all about to join your glorious, all conquering army.