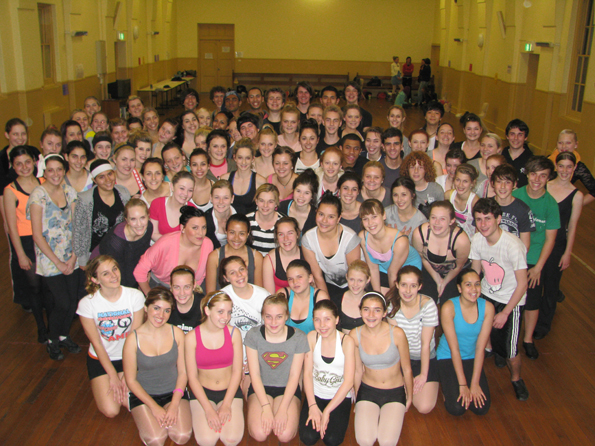 We all know of the TV phenomenon Glee. Audiences worldwide have been captivated by the show, which has made singing and dancing ‘cool’ for the masses. The Australian Institute for Performing Arts, well known for its international talent development programme and tours, has come up with a new innovative program called Glee Club Australia. This program provides students with the opportunity of a lifetime – to train, perform and record in Los Angeles and be part of a documentary about the entire experience. The program brought renowned Casting Director Richard Mento (Step Up 1, 2 & 3) to Australia to work with Marg Haynes, Creative Director of The Australian Institute for Performing Arts and Charles Bartley from SYTYCD to audition dancers for the Club. Chris Bamford caught up with this dynamic team while on audition tour to talk about Glee Club Australia and the performing arts industry here and in the US.

Richard, tell us a little about your background in the performing arts?
“I am a casting director in LA.  I have been in casting for approximately 15 years. I was very fortunate to start my career in casting for Broadway and I now cast for feature films. I moved to LA in 2001. In the 90’s I got to work on some really big Broadway musicals and I have worked on the three Step Up movies. I had the pleasure of meeting Marg Haynes about a year and a half ago. I worked with a group of up and coming actors from Australia, Canada and South Africa as part of the Professional Actors Masterclass.  Now I’m here to help with GCA auditions.”

Richard, you have worked in Broadway and film. What is the difference between casting a Broadway show versus casting a movie?
“They’re different stylistically and the process is different. In between working in theatre and film I did casting in television. One of the reasons that I moved into TV was that after three and a half years of just singers and dancers, from a casting perspective, it was very limited. If you couldn’t sing or dance  then I had no use for you. Film and TV is a different pool of talent and a lot of Broadway shows do an open dance call and cut. Film and TV casting are a lot more up close.”

Do you think Glee has increased the popularity of musical theatre?
Marg: “I think there is a better awareness of musical theatre.  It’s the cool thing to be involved in. Gone are the days where a 14 year old had to be dragged to a musical kicking and screaming. If someone says they do musical theatre in the playground no one blinks an eye, whereas in years past you may have been teased.”
Charlie: “It’s interesting. You see a whole bunch of kids come and scream when you do things on stage and after the show they are very shy to meet you. The mums say that they’re all going to start dancing now because of you. This is why I do what I do – to inspire other people.”

Tell me a little about Glee Club Australia. What can the successful applicants expect?
Marg: “The program is a talent development initiative. We don’t promise anything we can’t deliver. The successful applicants can expect to work with some of the creative team from Glee, including the choreographer Zach Woodlee and Musical Director Tim Davis. They will work with the casting director of Glee and the Mentalist, as well as other casting directors from this genre. To get going in LA you really need a fan club of at least twelve casting directors that will back you up and say, ‘yes, I will write you a reference for an 01 Visa’.”

The aim of the GCA project is multi-fold. In addition to the training and performances experiences, our projects are grounded by educational goals and outcomes. We teach students about the practical elements of the LA industry such as where the major studios are, getting around LA, which neighbourhoods are “performer friendly”, how to find second hand furniture, how to get a lease, find an agent and a good head shot photographer.  LA can be daunting, but with the right preparation it can be a really positive experience.  We will also point out places of interest such as where to take class, like Edge, PAC, Millennium and International Dance Academy.

The cast is recording an original song that’s being written for the group by a very well known and respected industry team. There is also an independent documentary being made about the project called “Bright Lights”.  If while the group are there an opportunity arises for them, such as a meeting or audition, we will encourage them to take that opportunity and see what happens.”

What made you want to start this program in Australia?
Marg: “There is a lot of talent here in Australia and we are a long way from the States. Sadly, there are sharks in the industry and I have seen some people’s dreams turn to nightmares.  Our aim is to give performers across Australia (including regional areas), a chance. We recently went to WA to hold auditions for the first time and we meet so many wonderfully talented, bright young Australians. The 26 hour day, which saw the team go from Sydney to Perth and return overnight, was so worthwhile.

The AIPA Talent Deveopment Project has great success stories from previous programs. We are proud of everyone who comes through our programmes. Young Australians who have worked hard and are making a name for themselves on the professional stage include Stephen Mahy who is currently starring in Jersey Boys and Hayley McCarthy who has just finished Mamma Mia. Chris Egan is doing very well in Hollywood now and he started through a talent development program here.”

What’s the best advice you can give to our readers who want to pursue a career in musical theatre?
Marg:  “Never give up. If you want a career in performing arts and you are prepared to REALLY work for it, you will get there. Do your homework. If it sounds too good to be true, sadly, it probably is. Ask people who offer you something, like an overseas tour, for references. Ask about their qualifications, professional affiliations and don’t be ‘sold the dream’. I always remind people of the episode of the Simpson’s when the monorail came to town – we all how that ended!”
Charlie: “Making it is hard. It’s not going to be easy. The mentality that all performers should have is that you’re goanna have to work hard for what you want because there are hundreds of thousands of people who try.”
Richard: “Work, train, and own your craft.  From a casting perspective it is a lot about talent. You’re either born with or without talent, but it’s how you use and refine that talent and also how you learn and grow from mistakes that makes the difference. I think there are a lot of people out there who are promising to  pay a lot of money and will open their doors for the performer, but it’s important to do your homework. Learn who you’re talking to, learn who you’re dealing with and find a reputable program to train with like AIPA.  Obviously there are multiple others around Australia and the US, but the biggest thing that we find lacking is that nobody in universities or full time schools really teaches their students about the business. They don’t teach you how to pick a manager, how to pick a head shot, how to judge what’s good for you, how to set up your résumé properly, etc. Nobody teaches these core things or even how to budget and make your money last between jobs. No one teaches how to be smart a performer, but AIPA does and that sets them apart.”

The Glee Club Australia program is about singing, dancing and acting.  How important is it to be a triple threat these days?
Marg: “Honestly, if I had my way, I would have every child and performer take ballet. When kids come to acting class and they ask me what else they can do to develop their skills, the first word out of my mouth is ‘ballet’. They are normally shocked, but as it is the foundation of dance and everyone needs to know how to stand and move freely, it is so valuable. They don’t need to be a prima ballerina. It’s simply about having the correct line. Being a triple threat is essential. Look at the films coming out, read the bios of truly successful actors such as Catherine Zieter-Jones and be inspired by them.
Richard: “In the US it is very important to be as well trained as possible, in all styles. You have to stretch yourself as much as you can. You can be an amazing dancer but if singing makes you uncomfortable that’s not a reason not to try it and to study it.”