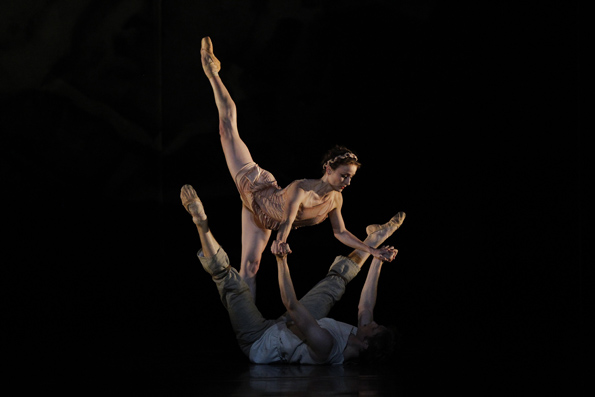 At The Edge Of Night
Choreography Stephen Baynes
Music by Rachmaninov

Solo pianist Duncan Salton, along with Orchestra Victoria, emotionally captured the thirst of the Sergei Rachmaninov seven preludes used by choreographer Stephen Baynes in the opening ballet At The Edge Of Night.

The set, which was rather epic and abstract, assisted in conjuring up the illusion of nostalgic longings and events depicted by the dancers. The ballet, which recalled the tender memories of people and events of lifetimes past, was set at dusk where their reminiscences were revealed. Here Baynes’ choreography allowed the dancers to tell their stories with quiet abandon and tempt us to immerse in their memories.

The pas de deux, performed by Olivia Bell and Damian Welch was danced skillfully, enabling Olivia to exhibit her superb facility. There were some lovely lifts, entwining the two dancers’ shapes and permitting attractive transitions, with tempting lines and structure. However, the interaction and identity between the two was lost as they were dancing in the dark. The lighting for me was too dim for this ballet, making the rest of the cast, who danced very well with only with a few timing and spatial errors, appear somewhat sullen throughout each of the sequences.

Memories can occupy our thoughts at any time and I feel if the stage was a little lighter it would have enabled us as the audience to immerse into and be a part of the work.

Brett Simon & Robyn Hendricks in At The Edge of Night. Photo Jeff Busby

The second ballet, by Tim Harbour, told of Greek wind goddess Halcyon who fell in love with a mortal man, Ceyx.  As with most Greek mythologies, this love angers the gods and tragedy results.

Madeleine Eastoe was simply superb and perfectly cast in the role of Halcyon. Her beautiful legs and feet were exquisitely presented within the stylish and the provocative choreography, allowing her to flaunt her mesmerizing ability. Her mortal lover, Ty King-Wall, more than just assisted Madeleine. He presented her with passion and intent, enabling their skills to combine, creating exceptional dancing. Their first pas de deux had wonderful sculptured shapes and forms with some rather nice lifts evolving and transforming into detailed lines and images.

I enjoyed the 3D effect reflected in the heavens as it made the imagery of the gods more understandable and the storyline more realistic throughout.

Kevin Jackson dancing as Zeus and Danielle Rowe as Hera both gave commanding performances as did the entire cast.

I really appreciated the choreography and would be intrigued to see if Halcyon could be presented as a two or three act ballet with grander sets and better lighting. Like with At the Edge of the Night, I felt that this ballet lacked expression and interaction with the audience as it was in general too dim. I was straining to see faces. This was proven when the dancers did their curtain calls and I was astounded to see the lovely detail and colour in their costumes which had been hidden by the lack of lighting.

Molto Vivace is taken from the fetes galantes or gallant festivals of 18th century France, where rich aristocrats enjoyed much leisure and grand parties. Two painters of the time, Fragonard and Watteau, who captured these festivals in their paintings, showed us different sides of human nature in their work and were the starting point for Bayne’s concept.

The cupids who ran the show danced around casting little spells (not unlike puck in A Midsummer Night’s Dream), with at times hilarious effect.  The two male cupids, Daniel Gaudiello and his deputy Brett Chenoweth were wonderful. Their eccentricity, especially Daniel’s strut, and effected antics combined to give us some very fine dancing. Both cupids were ably supported by Dana Stephenson and her deputy Eloise Fryer. The Sarabande and the Vivace couples stole the show with their witty, animated and communicative telling of what was really going in their propinquity of France during that period.

Abstract shapes and forms as dancers were carried or lifted along with playful aberrant choreography enabled the cast to project themselves in an array of anomalous and comic representations which helped to create a satire of 18th century France.  Continuous peeking by the dancers, at who was going with or doing what to whom, was the thread that assisted in joining the whole ballet together.

The costumes were bright, colourful, and perfectly suited to the ballet with the exception of Adam Bull’s opening white jacket, which appeared far too oversized and made him look somewhat out of place. However, later in the ballet he returned without the jacket and then looked perfectly at home.

Artist Watteau, on the other hand, had completely different sensibilities to Fragonard. Here Bayne’s pooled the Lady, played by Amber Scott with her suitors Adam Bull and Brett Simon in a sophisticated alluring and idyllic trio with both boys vying for Amber’s attention.

Adam Bull won Amber’s affections and in the pas de deux that followed the two combined to give justice to the meaning of poetic perfection! The two were as one. Simple gestures such as a hand under the chin and glancing into each other’s eyes with ardent devotion really brought us into the pas de deux. Exquisite line, beautiful feet and rotated legs, displaying a technique envious to most, enabled Amber to be presented so skillfully by Adam. The only disappointment with the pas de deux was that Adam did not do anything except partner (a little more reminiscence of the 19th century). One does have to ask, “could this be the next great partnership?” Only time will tell!

The ballet was wonderful. Although I could see many similarities with several other ballets, and it was a little predictable at times, I commend Stephen for putting more comedy in dance – an element that surely draws us all in. I hope that Stephen continues to explore this arena. Bravo!