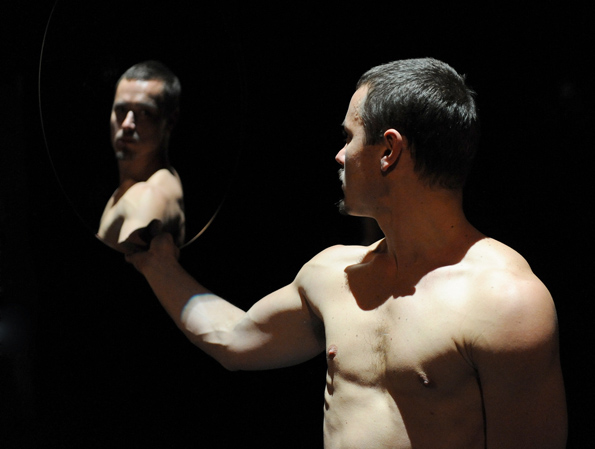 In Glass is a mysterious and exciting new work choreographed by Narelle Benjamin, performed by celebrated dancers, Kristina Chan and Paul White.

Benjamin’s choreography is very demanding and quite stylised. At times it’s fluid, rippling and sculptural, with emphasis on the use of the elongated back, and then it becomes more detailed, focusing on the use of the hands and arms. A yoga influence is evident in various sections, requiring extreme control. The work could perhaps do with fractional gentle trimming, but overall it is enthralling.

The two magnificent dancers give intense, harmonious performances .Benjamin was inspired to create this work having observed the dramatic power of Chan and White’s lyrical performance together. At times they perform in unison, at others they mirror and echo each other. We are treated to an extraordinary pas de deux where they angularly enfold each other.

Mirrors are a central theme of this work, reminding me of the cracked mirror of fairytales like in Snow White or the broken mirrors in Miss Haversham’s haunted house. Mirrors also reflect how we see ourselves and others in relationships. There are no Cocteau like mirrors, but instead some bizarre surrealist images and ruminations on self and nature. At times the mirrors reflect the audience, sometimes the mirror is shattered and cobwebby, at others the mirrors are clear and the dancers step through or around them.

The stage itself in the Studio is mostly bare, apart from the curved layer of moveable mirror panels. Samuel James’ film footage is crucial to the show, as is Karen Norris’ lighting. There is lyrical footage of Chan in a garden, symbolic of the Garden of Eden perhaps, and some wonderful nature footage of moss and trees. In another section of film Chan floats topless while the dancers perform live on stage. At times White and Chan interact with their video counterparts creating a dream-like vision.

Momentarily we are blinded by the oval hand held mirrors as they are manipulated in the performance by White. Benjamin shows her creativity with her ingenious use of these props. In one section they are like butterfly wings and in another the work is reminiscent of Murphys’ ‘discus’ solo for Ross Phillips.

Huey Benjamin’s soundtrack is magnificent and is integral to the performance. It goes from jarring and crackly to rippling and lyrical and is interesting and unique.

Hypnotic and powerful, this is a rich and splendid display by three of Australia’s top performers.