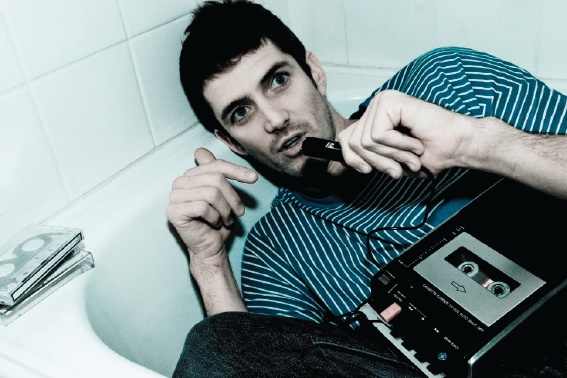 Gideon Obarzanek’s Chunky Move presented its third production for The Next Move, which is a series of performances by up and coming Australian dance makers.  On this occasion, Stephanie Lake directed and choreographed Mix Tape – a piece about love.  Utilising songs and recorded interviews, and performed at Chunky Move’s own performance space in Southbank, Mix Tape was a very personal affair that explored the divergent emotions and experiences uncovered under the auspices of romantic love.

The blip of an old tape deck signalled the beginning of the audience’s journey, and as it sat perched on a bookshelf at the back of the stage, the four dancers (Sara Black, Rennie McDougall, Timothy Ohl, and Jorijn Vriesendorp) grabbed our attention by stamping their way barefoot into the space.   Stephanie Lake’s frenetic, nuanced, and challenging choreography suited the dancers who quite literally threw themselves into the work, and traversed the stage with great intensity and strength.

Through the recorded interviews, we glimpsed the humorous side of love which helped ensure the piece didn’t get bogged down in the usual clichés associated with the subject matter.  Lake treated the topic with sensitivity and a fresh perspective, and the piece was saved by ingenuity rather than falling prey to the familiar tune of the theme.

The use of songs allowed the piece to say a lot more than it could have with dance alone, and a highlight was Bob Dylan’s Shelter From The Storm which was the soundtrack to an excellent piece that saw the dancers wrap, unwrap, and weave in and out of rolls of paper as tall as they were.  Sometimes the paper brought them together, and sometimes it tore them apart, much like the theme of love.

Mix Tape closed with a tempestuous storm which was a not so subtle metaphor for the difficulties of love, and it showed the dancers attempting to weather the storm before they were unfortunately beaten.  The frenzied finale which had the dancers tormented by their losses showed us that love doesn’t always last, but it is one hell of a ride.