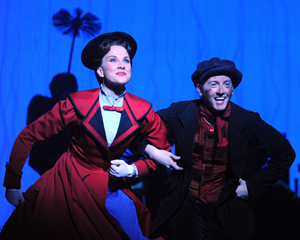 Mary Poppins lives up to expectations. It really is ‘supercalifragilisticexpialidocious’.

The Australian production of the Disney musical is Broadway quality with all that jazz. I beamed from ear to ear like a child and sang along with the songs as I immensely enjoyed the show at Melbourne’s Her Majesty’s Theatre. And yes, I would see it again!

The Cameron Mackintosh musical production of Poppins stems much more from the P.L Travers series of books than from the Disney movie we’ve grown up with. There are characters and storylines that I was unfamiliar with, but they all add to the production and create an interesting plot. Much to my delight we enjoy characters such as dancing statues, performing beautiful contemporary ballet moves, that we didn’t meet in the film.

The dancing statues are a great addition and my only gripe with this scene was the flat footedness displayed by dancer Mitch Fistrovic as the leading statue ‘Neleus’. He is a strong and capable performer, but at this performance he failed to fully pointe his feet and finish his lines.

The sets are ingenious and the staging is exceptional. Every scene is enchanting as if it is straight out of P.L Travers incredible imagination. Sets of gardens, roof tops, street scenes and the Banks’ house are designed brilliantly as they move in and out, and up and down into view.

Mary Poppins has so many highlights that it is hard to choose a favourite. The tap dancing chimney sweep scene, led my tapper extraordinaire Matt Lee as Bert, is incredibly entertaining with some fantastic surprises and clever choreography. Matt Lee was born to play Bert. He is perfect for the role and an assured musical theatre performer. His singing, dancing, acting and overall commitment are impressive. Verity Hunt-Ballard as Mary Poppins, like Lee, is ‘practically perfect in every way’. She suits playing Mary and is the ideal balance of formal, yet loveable. She is just brilliant. Marina Prior is a treat as Mrs Banks, with her beautiful vocals and Debra Byrne as the ‘Bird Woman’ is musical magic. The children, (Jane and Michael Banks) played by Hayley Edwards and Trent Heath at this performance, are incredibly talented. Edwards seemed to overact at times in her role as Jane, but is a lovely singer. Heath as Michael is adorable and an ideal fit for the role. He has a great future ahead in musical theatre.

The production builds from crescendo to crescendo and always keeps us engaged. As a dancer, I thoroughly recommend this musical as there are several fantastic dance numbers. A sign language inspired dance to Supercalifragilisticexpialidocious is a lot of fun and very creative. The concept was apparently suggested by choreographer Stephen Mear, whose partner is deaf. It is tricky for the dancers and must have taken hours of practice, but it was worth it. Re-performed at curtain call, the audience couldn’t help but sing and bop along!

Mary Poppins the musical is colourful, creative and full of surprises. Complete with magic tricks, a flying Mary and brilliant music, Mary Poppins is a must see for young and old. It was definitely a ‘spoon full of sugar’ for me on a raining, cold night in Melbourne.