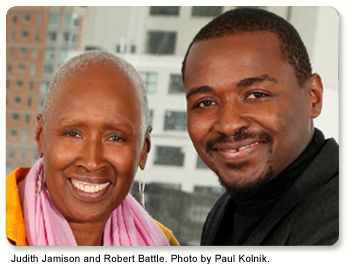 Judith Jamison has announced that her mantle as Artistic Director of Alvin Ailey American Dance Theater will pass to Robert Battle. Battle is a fast-rising choreographer who has created ballets for the Ailey company and Ailey II since 1999 and has served as an artist-in-residence with The Ailey School. Mr. Battle, 37, will be the third person to head the company since its founding by Alvin Ailey in 1958. He will serve side-by-side with Ms. Jamison as Artistic Director Designate from now until July 2011, when she takes Emerita status and he assumes his full responsibilities.

Judith Jamison stated, “We are enormously fortunate in being able to secure the leadership of Robert Battle. Combining an intimate knowledge of the Ailey company with an independent perspective, he is without question the creative force of the future.”

Accepting his appointment as Artistic Director Designate, Robert Battle stated, “I don’t know whether to call this the proudest moment of my life or the most humbling. With the help of Judith Jamison and the great, great dancers in this company, I hope to be worthy of this tremendous responsibility that I’ve been given, and to honour it in the only way Alvin Ailey would have accepted: by keeping it new, alive and moving forward.”

“In seeking a new artistic leader for the company, it was important to find someone who has his own vision, his own experience,” Judith Jamison explained. “Robert has his own company and is a maverick in his choreography. He’s edgy and forward-thinking, very talented and savvy-a lovely, intelligent person who in many ways reminds me of Alvin. He also has a worldview and is capable of taking this company in new directions, while at the same time understanding our traditions. Choosing Robert Battle is the giant leap I want to take to ensure that this company stays vibrant in the future.”