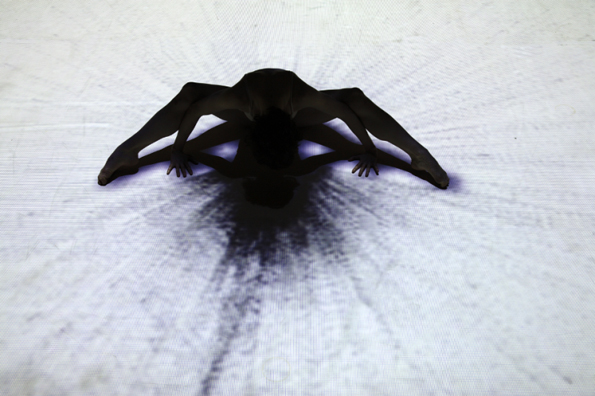 Having performed with Australia’s Chunky Move, Lucy Guerin Inc, Prue Lang, Kim Itoh, Shelley Lasica, and Luke George, dance veteran Kristy Ayre is one seasoned performer. And she’s far from done yet. Fresh from the successful Melbourne season of Chunky Move’s Mortal Engine, Kristy is set to reprise her role for Sydney audiences in May. Dance Informa’s Grace Edwards caught up with the talented dancer and emerging choreographer to chat about Chunky Move’s acclaimed work and her experiences with the company.

You’ve been dancing regularly with Chunky Move since 2002. Over that time, what do you feel has been the driving force behind the company’s success?
Well as you know, Chunky Move isn’t a full-time company, so all of the dancers and collaborators who are involved in making the works only come in and work for the amount of the time that the work is created for, and then are re-engaged to come on tour at later times. But I think what’s most interesting about the company is [Chunky Move Artistic Director] Gideon’s interest in what he’s trying to make, both spatially within whatever set is used and in the thematics of each show. The creative team and dance that make up each work at Chunky Move have been quite different from work to work, and the end results have been really different.

You’ve got everything from the really high-tech, fixed dance steps and raked stage of Mortal Engine to something like Tense Dave, which had a few sort of dancer-actor performances that, to me, could be classed more in the realm of physical theatre. I mean, it certainly was dance-based, but there were a lot of theatrics involved and there was a revolving set. It was very low-tech in a lot of ways, so yeah, I think it’s been the diversity of experience and the number of collaborators that has made the company exciting to follow.

Mortal Engine, in particular, is full of technological interactions. What’s been involved for you when working with movement-sensitive technology as a dancer?
It was interesting because we actually began the process with the solo work, Glow, which was made in 2006. I was one of the original soloists engaged to work on that show, so I was already quite experienced and knew how to work with Calypso when we came into the creative process of Mortal Engine. But I’d like to share with people that it’s a really liberating way to work as a performer. Unlike in previous works that I’ve done with conventional lighting, where there’s a spotlight that you have stay within or a place you have to be within a certain amount of time – works in which your relationship to light is really crafted, in this work the light is following you in a lot of the piece, because of the motion-tracking. So you have the freedom, as a dancer, to not be concerned with all of that and you can absolutely surrender to the physicality of the work, which is really, really nice.

There are so many interesting aspects of Mortal Engine, from the sense of collective ownership between collaborative artists, to the play on opposites such as mortal and engine, and light and shade. Where, for you, does the beauty of the piece lie?
I think the beautiful thing about Mortal Engine is that, because of the light and the way we’ve integrated the movement and the way that, as performers, we kind of selflessly give ourselves to the visual effects of this show and to the sound, it creates a very hypnotic world.

I mean, I say this when I’ve only ever seen the show on DVD, I’ve never actually sat in the audience to watch this show! But I think, having talked to people continuously all around the world because we’ve toured this show a lot now, people really feel like they have a kind of…“body-snatching” experience.

Because the sound is so consuming and the visual effects are startling, beautiful and dark, as a dancer, you really feel like you’re a part of some special, make-believe land for a period of time in the show. That’s really nice, because not all works have all the elements in place to do that and be successful in that way. So I think that Mortal Engine‘s beauty is that kind of escapist, voyeuristic experience for the audience.

I completely agree. In fact, I took a friend of mine along to see the recent Melbourne season of Mortal Engine. Although she had never been to a contemporary dance show before, she was blown away by it all! I believe she had that voyeuristic experience you just mentioned.
Oh, I’m so thrilled to hear that. Yes, it’s a show that I really encourage people who haven’t seen a lot of dance to see for that reason, because I think it actually can appeal on a lot of levels. You know, I almost like to refer to Mortal Engine as simply a moving live visual artwork, because I think the dancer plays a really strong role, but it’s certainly just a component of what that work gives over to the audience.

Kristy, you’ve done numerous performances of this work. How does each performance differ?
This show is different, as was Glow. Because you’re working with motion-tracking, it does have a real sense of ‘liveness’ to it. I mean, all dance is live, but because you’re not in a fixed place or time in space, you can really absolutely give yourself over to the physical experience because the technology is following you. So we’ve guessed that one show has never been exactly the same.

I imagine there is now a core group of dancers who know and have danced in Mortal Engine, so what is the main focus in rehearsal these days?
Well actually, the biggest predicament with this work, and this is one of the things Chunky Move suffers from because unfortunately they can’t employ a full-time group of dancers, is that occasionally when we’re touring the show now, we won’t be able to have our original cast. Most of the performers who work for Chunky Move are also engaged in independent work of their own, or with other people, so the flux of this work is that we generally have at least one person who wasn’t a member of the original cast joining us for each new season. When we get back together, it’s kind of a culmination of bringing in someone new, and then them trying to learn the new material and become part of the group. It’s good in a way, because it keeps things really fresh for us. There’s a lot of partnering and intricate duets in this show, so when there are changes to the combinations of dancers that affects everyone, so that’s kind of nice about it.

As a performer with many years experience behind you, what keeps you going and how has your approach to your own dancing changed?
I guess I’ve become interested in different things. I’ve been dancing all my life and certainly as a professional artist I’ve been working for about nine years now.

The thing that I love about contemporary dance, the thing that always attracted me to it, is that it’s an ever-evolving form, and I think it’s really great that people are continually pushing the boundaries of what it is, what it can inhabit as a technical, physical, or performance medium. That’s interesting because you feel that you are very much a part of a contemporary dance form which is constantly evolving and doesn’t seem to sit in a world that’s too repetitive.

I think that one’s interest in the physicality of movement really changes. I’ve been working with independent artist Luke George this year and I’ve started making my own works seriously for the first time. So there is this transition happening, from being a tool for choreographers for a period of time when working in a company-based environment, to making works where you make the stuff that you want to make, utilising the physicality that you like. That’s been a really interesting process for me as I’ve matured.

Chunky Move’s Mortal Engine heads to Sydney Theatre from Wednesday 5th to Saturday 15th of May.
Book tickets online at www.sydneytheatre.org.au or phone (02) 9250 1999.