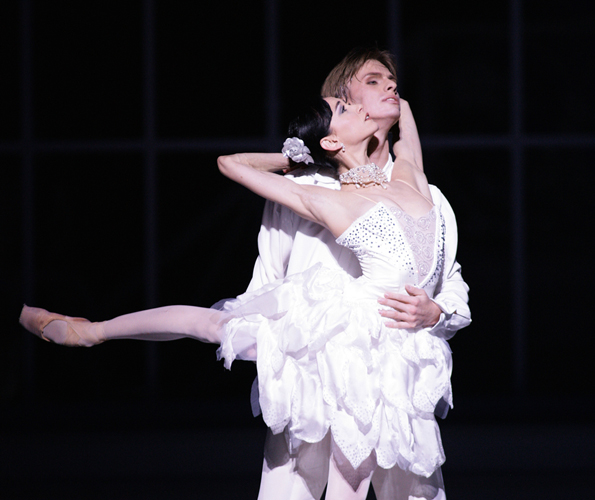 Based on Richard Strauss’ Der Rosenkavalier (The Knight of the Rose), The Silver Rose has retained the majestic feel of an opera. The characters are larger than life, the set and costumes rich and dazzling, the story line equally tragic and comic.

The ballet was originally commissioned by Bavarian State Ballet, and was choreographer Graeme Murphy’s first full-length ballet on a major classical company outside The Australian Ballet. Its premiere took place in 2005, at the Munich National Theatre, where Der Rosenkavalier itself was first performed.

I give full credit and respect to the dancers, musicians and the entire artistic team, but it was Roger Kirk’s design that stole the show. From an enormous silver rose suspended in front of the grand drape to the lighting which perfectly evoked the subtleties of the story, and from the corps de ballet in silver ball gowns and full-length gloves to the final snowy snapshot, Kirk’s craft was absolutely stunning.

Danielle Rowe played the Marschallin, a famous, ageing actress coming to terms with the inevitable passing of time. Her finest scene was definitely the finale pas de trois with her young lover Octavian and Sophie, whom he chooses over the Marschallin. The choreography, and Rowe’s interpretation, bring to mind the universal wisdom of Ehrmann’s Desiderata: ‘Take kindly the counsel of the years, gracefully surrendering the things of youth’.  Amber Scott as Sophie was lovely, technically assured, and one hundred percent committed to her character’s story.

The role of the young lover Octavian is one that a dancer can really sink his teeth into. From his sensual love affair with the Marschallin, to the comedy of finding himself dressed as a maid, or his fending off of the advances of a lecherous Baron Ochs, the character goes through many changes in the ballet and really links the three Acts. Soloist Luke Ingham rose to the challenge of this role, with a competent, consistent and engaging performance.

The characters of the paparazzi, with their innovative pas de deux, brought dark humour to the ballet. Played by Robyn Hendricks as the journalist and Brett Simon as the photographer, these were fantastic showcases for the Coryphee. Hendricks in particular, was captivating, and again, Kirk’s costumes really enhanced the roles.

As ever, Murphy’s choreography, assisted by Janet Vernon, is gorgeous, apart from just a few awkward moments in the Act Two love triangle between Octavian, the Baron, and his future bride Sophie.  The opening of this Act, the betrothal ceremony in the ballroom, with seemingly hundreds of swishing silver ballgowns, is lightning-quick and complex, though not always in perfect formation.

It is interesting to note that the score for The Silver Rose was not composed as a whole specifically for this ballet. Composer Carl Vine wove together individual pieces from his personal body of work to create a final score. Each piece comes from different periods spanning two decades but has melted together to form something cohesive and seemingly custom made.