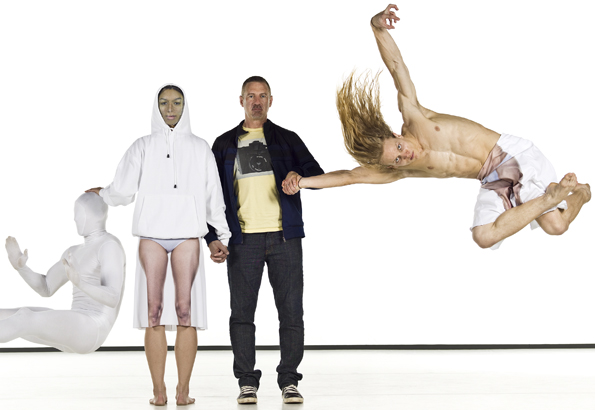 Garry Stewart breaks it down for ADT’s latest expression.

Be yourself. It’s a simple enough idea … isn’t it?

When Australian Dance Theatre debut their latest work at the upcoming Adelaide Festival of Arts the notion of ‘being yourself’ will be seriously deconstructed. Inspired by Eastern ideas about selfhood, ADT’s artistic director Garry Stewart has created a choreographic meditation on the theme of ‘I’.

Be Your Self has evolved into a dazzlingly surreal and architectural dance work.

“If we look into our interior….we can’t find anything other than our perceptions,” Garry Stewart begins. “There isn’t a thing in and of itself that we can identify as I or self. We are more like an array of perceptions that our conscious mind then constructs into a linear narrative of self … So I started the work off with the question: is the self the body?”

It’s an appropriate starting point for someone with a two decade plus track record of creating truly cutting edge contemporary dance. Indeed, Stewart’s works have been seen around the globe, with his Millennium Eve piece Housedance (performed on the outside of the Sydney Opera House) netting an estimated TV audience of two billion. What’s more, since taking over the stewardship of the internationally renowned, Adelaide based ADT in 1999 he has created critically adored works like Birdbrain and HELD.

Glittering CV notwithstanding, Stewart is not afraid to dive into the esoteric depths with Be Your Self. “I wanted to try and collapse the schism between mind and body because still in the twenty first century we think that mind, body and spirit are separate, whereas in fact neuro-biology is collapsing that separation and showing that what we consider our mind to be is very much inherent in what our body is.”

“We don’t isolate senses. We don’t just see or hear – but all of those things act in concert. It’s a total experience. And with the emotions; they don’t just happen in the mind, they happen in the body. Could you imagine fear without the dry mouth or the dilation of the pupils?”

What you sense here is an artist very much engaged with his topic and taking his work beyond mere prettiness. “How much of a construct is the self and how illusory is the self?” he continues with passion.

But of course, we are still talking art here, not just indulgent philosophising. “We are an animal of representation,” he adds. “The most distinguishing feature of being human is our ability to transform reality into a multiple series of representations. And this is never more apparent than when we make art.”

Choreographically, the challenge for Garry Stewart has been to illustrate such high end abstractions with movement. In doing so he talks about deconstructing the human body, as both physical form and cultural construct.

To this end he has collaborated with award winning New York architectural firm Diller Scofidio + Renfro (DS+R). “They created a set design that allows us to show individual body parts and occlude and disguise others. So, it’s kinda like a symphony of body parts.”

In fact, it’s fair to suggest that Be Your Self transcends the dance. “It’s too limiting to describe it as a dance work. It’s more an artistic expression about the human body. You would call it dance – but somehow that word seems too restrictive.”

The concept is daring and, you might think, a little too way out for most audiences. However, for all of Garry Stewart’s attention to research and conceptualisation the idea of the audience is never far away.

“The pleasure of a visual image grants an audience access to an idea,” he states. “It’s a kind of strategy. I mean, you can make something that’s like an essay on stage but it could bore everyone to tears. I think when you’re creating art you are working in an aesthetic dimension and you have to acknowledge that, otherwise you might as well just get them to read the essay and not bother coming to the theatre.”

As he says, he creates his works “for an audience” and not just “as something for my own pleasure.” The challenge, he says, is in “finding the balance between being translatable and accessible but also mysterious; although not to point of being dismissed as obtuse.”

And here we drift onto the vexed notion of beauty, (my word choice). I can sense his discomfort as we talk about it until he comes out and declares, “It’s kinda hard for me to hear the word beauty; especially with dance, because the conventional ideas about beauty have really held dance back. It’s kinda like a dictatorship in dance.”

Perhaps there in a nutshell is the nub of where Stewart will take both the company and his audiences with Be Your Self – beyond the obvious and into profoundly stimulating, creative territory.

Win a Double Pass to the Opening Night of Be Your Self !
One lucky winner will also get the chance to Meet and Greet Garry after the show!  To enter click here

Be Your Self – Australian Dance Theatre
Date: February 20th, 23rd-28th
Venue: Her Majesty’s Theatre
Contact: BASS 131 246 www.adt.org.au
Please note: This show has strobe effect lighting and is for a mature audience