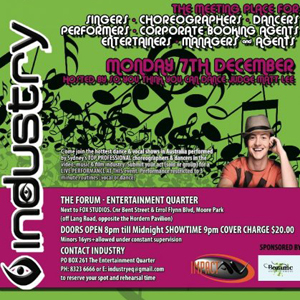 Industry night was once again an eclectic mix of dance and song.  Some pieces were fantastic….they were innovative and creative.  Others should have been given the chop.  The night was quite long, with two full sections of dance and a music/vocals section in the middle.

A standout piece was Richard Tsunami’s hip hop choreography. Recently back from LA after spreading his wings and doing what we all dream of, he brought a really fresh flavour to the night. Stephen Tannos’ Digital Death was very entertaining and a clever flashback to old school computer games – brilliant. However, my personal favourite was the Too Much Bun boys, who danced a protest to too much bun and not enough filling in burgers – so funny!

In such a long program, the pieces that stood out were either full of entertainment value or a step above the rest in the talent department.  A highlight of the night was having the lovely Miss Jennifer Dinoia, a Broadway performer who has been playing Elphaba in Wicked on Broadway, sing for us. She is here in Sydney for a short season playing the same role in the Australian production of the musical.  What a treat!  As Industry was on a Monday night, we were able to see a lot more artists who are currently in musicals attend and perform, which was great.

A-live Entertainment closed the night bringing their usual great flavour and energy.  Overall the night was a little long, but with some great highlights. I definitely recommend getting a ticket to Industry 2010!