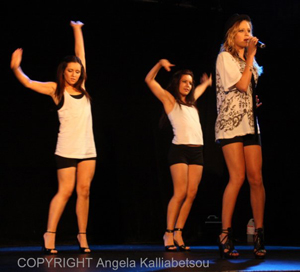 Many have mourned the passing of one of the world’s greatest performers, Michael Jackson, but others have chosen to celebrate his legacy. On August 13th Sydney’s performers had their special way of saying goodbye and thank you to Jackson and did so in a very fitting way at Industry night. The evening also paid tribute to the late Ross Coleman, one of Australia’s musical theatre greats. The event was held at The Forum in Fox Studio’s Entertainment Quarter and was hosted by the very talented Matt Lee and Leah Howard.

The evening opened with a group of young Brent St students, with the boys doing their share of Jackson impersonations. SYTYCD’s Timomatic performed an original song inspired by Jackson and also gave us his rendition of Billy Jean and the moonwalk; there were many performances of the Jackson signature move throughout the night.

There were some well known names taking part in the evening. Jason Winters choreographed a lyrical piece to Dirty Diana danced by Lockhart Brownie. We enjoyed some comic relief from Chaz Cummings, who had great success in New Zealand’s Got Talent. He performed a simple slapstick comedy that never failed to get a laugh from the audience. It was very entertaining. Cameron Mitchell’s choreography to Street Walker was full of fast intriguing movement. It was a tight number.

There were many pieces that contained only one Jackson song that were then followed by a random mix of songs. These pieces didn’t seem to truly be a tribute but rather just a bunch of the choreographer’s favourite songs, lacking a theme and flow. Unfortunately this is something that is happening all too often these days. Choreographers need to get creative and relevant with their music if they are going to mix it up with their song choices.

The founder of Industry and Principal of Brent Street Studios, Jacqui Howard, choreographed a piece to You Are Not Alone. The performers stood on a huge scaffolding platform and were separated by curtains, never touching each other, but trying to. It was simple and communicated exactly what the song was about. Working Day and Night, choreographed by Ilona Fabiszewski and Luke T-Leane was a slick performance and another highlight of the evening.

Industry is a great performance platform for local Sydney-siders and celebrates home grown talent. Industry has enjoyed a successful last five years and is open to a wide variety of performers. Performances can be up to three minutes long and submissions can be made to industry@brentstreet.com.au