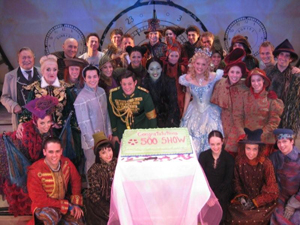 WICKED has celebrated the milestone of 500 performances in Australia. Opening at Melbourne’s Regent Theatre in July 2008, the musical played for 13 months in Melbourne where it broke many records. The musical had the longest season ever at The Regent Theatre, took a record of more than $2.3 million in advance bookings in just three hours on February 12, 2008 and on the Monday after it opened, smashed the one-day box office record for all Melbourne theatres with a $1.5 million ticket sales.

Since opening at Sydney’s Capitol Theatre on September 5, 2009, WICKED has achieved huge success. The show has broken all previous weekly box office records for a musical at the Capitol Theatre, grossing $1,473,775.70 in one week. At last night’s show, Tuesday October 27 at 8pm, performance number 500 was reached. Since it opened in Australia, WICKED has been seen by more than 750,000 people and been presented with six Helpmann Awards®, including Best Musical.

Australian Co-Producer of WICKED John Frost is thrilled that his production has reached this landmark. “Australian audiences have fallen under the magical spell of WICKED. This show is a phenomenon, quite unlike any other musical, and appeals to people of all ages. I know that many people who have never before been to the theatre have come along and loved it. And many WICKED fans have come back time and time again to see the spectacle. I’d like to thank audiences for helping us reach the milestone of 500 performances, as well as everyone who has worked on the show over the past 15 months. Bookings are very strong in Sydney and we hope to be here for a long time.”

WICKED, with music and lyrics by Stephen Schwartz (Godspell, Pippin, Academy Award-winner for Pocahontas and The Prince of Egypt) and book by Winnie Holzman (My So Called Life, Once And Again and Thirtysomething) is produced by Marc Platt, Universal Pictures, The Araca Group, Jon B Platt, David Stone and John Frost.