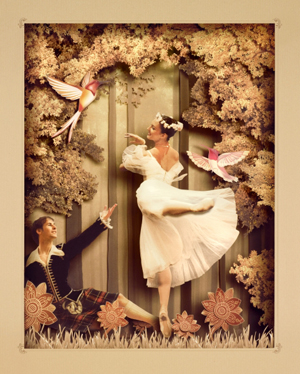 The evening opened with August Bournonville’s Dances From Napoli, taken from the third Act of his 1842 ballet, Napoli. The full length ballet was choreographed after Bournonville had visited Naples and been moved by the ‘local colour and vibrancy of a city in constant movement’. This brightness and energy is certainly captured in the choreography.

In this excerpt, none of the story of the full-length is retained, and we are left with a series of sprightly divertissement. Without sets or storyline, this becomes a platform to display fine technique and virtuosity.

My calves practically burned in sympathy with the company! Bournonville is well known for his use of ballon, and this ballet is the perfect example, with its feather-light allegro. The footwork was quick and fluid, however some of the most stunning moments for me were that of stillnesses as the dancers returned to fifth position in a flash, often with barely perceptible demi-plie.

Lucy Balfour in the Tarantella best embodied the Italian spirit. Her dynamism and her conviction stole the stage! In the Pas de Six, Alayna Ng shone. Her technique was faultless and her performance warm and generous.

After the first intermission came La Sylphide itself. The sets for both acts (on loan from the Australian Ballet) were magnificent.

Jacob Chown handled the role of ‘James’ admirably. His technique is solid and his pirouettes (also standing out in Dances From Napoli) were impressively controlled and consistent. Brendan Bradshaw brought a very natural sense of comedy to his ‘Gurn’, and was technically excellent.

The Scottish reel was a high point; well-rehearsed, colourful and jubilant. Young guest Emily McLaren did a great job as ‘Fiona’, keeping up with the frantic footwork and changes of direction.

Katie Hurst-Saxton was lovely as ‘Effie’ and it was a shame we didn’t see more of her during the evening!

The third Act opened with the witch ‘Madge’ and her minions dancing around a bubbling cauldron, complete with wonderful props and special effects. Sir Jon Trimmer as ‘Madge’ was, as ever, an absolute treat. He was the highlight of my evening.

As the tabs opened on the enchanted forest scene, the audience’s delight was audible. Fraser’s décor and Jon Buswell’s lighting created the perfect Romantic mysticism.

Tonia Looker as the ‘Sylph’ ticked all the boxes; seemingly weightless, at times mischievous and finally tragic. She has a wonderfully expressive face.

La Sylphide is one of the few Romantic ballets which remains largely unaltered from its original form. It is fantastic that it is still being passed on down the generations and the RNZB (with the help of ex-Artistic Director, Matz Skoog) did a great job of continuing this legacy. I think Mr. Bournonville himself would have been proud!