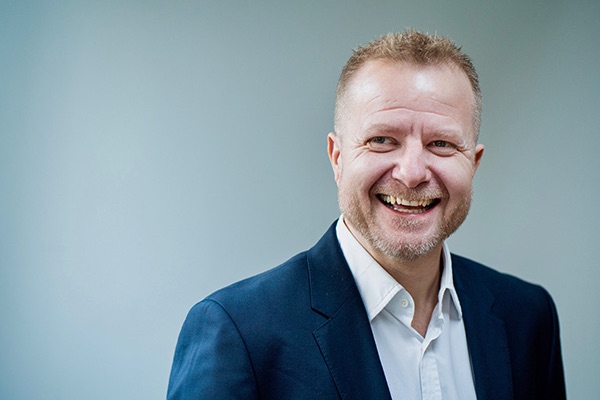 It’s a chilly winter evening when I sit down with new Royal Academy of Dance (RAD) Chief Executive Tim Arthur to discuss his new role, and his vision for the renowned dance organisation. Arthur’s affable nature and zest for the role immediately warms up the space, as we chat about his unique and varied background and his open mind for the future.

Within four weeks of taking the role with the RAD, Arthur was flying to Australia to immerse himself in all things RAD Australia. Formally the CEO of Time Out magazine, and Virgin Money before that, Arthur never had the chance to travel to Australia in his previous roles.

“Sydney is such an incredible city. I loved it!” he says of the experience. “I felt it was really creative and fun, and everyone was so welcoming. It gave me an amazing opportunity to see some of the NSW RAD teachers, spend time in the schools and meet with our examiners. It was a great opportunity to get and see the work we do on the ground in Australia. The teaching I witnessed was fantastic, and unbelievably inspirational.”

Arthur was in Australia to recruit a new National Director, who, after an “exhaustive search”, has been announced as Aaron Bloomfield, previously of Gymnastics NSW. Bloomfield joined RAD Australia on 18 July.

“He’s brilliant and has real passion for this job. He just blew me away,” says Arthur of Bloomfield. “When we interviewed, I was looking for somebody who could really get under the skin of our business – understand how we can move it forward, how it can evolve, and bring all the learnings that he’s got from his previous job and some new thinking to RAD Australia, and the RAD in general.”

With 19 years’ experience at the helm of Gymnastics NSW, Bloomfield understands member organisations, like the RAD.

Alongside Arthur, with his eclectic wealth of learnings across varied roles in media, finance and the arts, the two new leaders are set to make exciting changes.

Arthur has had a “peculiar, fun career working in lots of different fields” (as he puts it), but it all actually started with performing arts.

So how did he end up, full circle, back in performing arts education?

“When I came out of Virgin Money, it was a time for me to reassess what was really important to me and what I wanted to do,” Arthur reveals. “I wanted to go back to something that was arts-based but also made a difference to people’s lives, that had a transformational element to it. I’ve always felt that interacting with the arts improves people’s lives. It makes them healthy, and makes them happy, it helps them connect to each other and to themselves. The more I looked at the Royal Academy of Dance, the more amazing I thought the organisation was. I didn’t actually realise the scale of it! I didn’t realise that it was in so many countries around the world. I didn’t realise the range of activities. It just blew me away, and the more I got involved with it, the more excited I got.”

Having learnt ballet, tap and modern as a child, and then running a drama school that also taught dance and singing, Arthur understands what it’s like for dance teachers and studio owners — the pressures, the juggle of being a teacher and an entrepreneur, inspiring young minds, dealing with parents, keeping kids safe, and the like.

“There’s lots in my background I’ve learned over the years. So I went, ‘You know what? I could really make a difference here. I could really apply a lot of the different knowledge I’ve gained from different sectors to help the RAD over the next period of time,’” he assures. “It’s an unexpected turn for me, but the more I’ve looked at it, the more of a dream job it is.”

With a strong legacy of 102 years of excellence in dance education, Arthur has much to build on for the future of the RAD, with an open mind and open heart.

“I didn’t come into the job with any set of assumptions or with a plan,” he says. “I came just with a lot of passion and excitement, understanding the huge potential and the amazing legacy to build on. I think the key for the RAD is that it keeps its core vision and mission, and that’s to inspire the world to dance; it’s to be a world leader in dance education.”

But Arthur won’t stop there; he wants to build on that strong foundation with a real emphasis on inclusion, saying, “I believe dance is for everybody.” He hopes to broaden the RAD’s appeal and to foster a love of dance in all, asking, “How can we bring people from all different backgrounds and abilities into dance? How we can continue to inspire them, so they become the next generation of dancers, or people who are passionate about dance?”

But how can the RAD achieve such a lofty goal, inspiring excellence, artistry and wider appreciation for dance? Arthur feels that the secret is the RAD members, listening to what is important to them — what they need, want and envision.

“I want to build a really customer-centric RAD,” he says. “That means that I need to listen to what the members really want, and to what our students need from us. I’m just really open to listening, learning and absorbing as much information as possible. Then building a strategy for the future together, collaboratively, coming up with a vision and a strategy for the RAD that I think hopefully will make our members proud. I’m excited about what we can achieve together!”