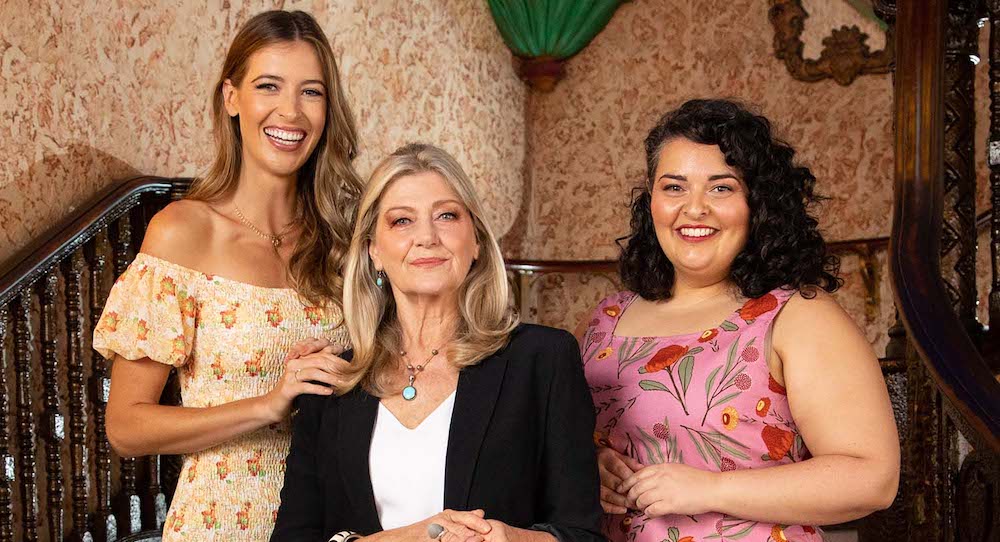 Lyndon Terracini for Opera Australia and John Frost for Crossroads Live Australia have announced the two talented actors who will feature as Cinderella’s stepsisters in one of the most beautiful musicals of all time. The Tony® Award-winning Broadway production of Rodgers + Hammerstein’s Cinderella will open at Melbourne’s Regent Theatre from 20 May, with a season at the Sydney Lyric Theatre from 23 October.

Matilda Moran will play Gabrielle, the stepsister who is at first aligned with her materialistic mother and sister, but whose kindness and thoughtful nature emerge as she is affected by Ella and falls in love with poor revolutionary Jean-Michel. A WAAPA graduate, Moran has played Fantine in Les Misérables, Gussie in Merrily We Roll Along, Kate in Titanic: the Musical and Patty Simcox in The Original Grease.

Bianca Bruce has been cast as stepsister Charlotte who is loud, brash, deeply self-involved and delights in being cocky. Bruce was most recently seen as Pam in the Australian tour of 50 Shades! The Musical Parody and in the critically acclaimed Music of the Night – The Songs of Andrew Lloyd Webber. Previously, she appeared as Camila in the Australian Premiere of In the Heights, as Ethel in Memphis the Musical and made her television debut in How To Stay Married on Channel 10.

John Frost and Lyndon Terracini said, “We’re thrilled that Matilda and Bianca are joining this outstanding cast, led by Shubshri, Ainsley, Silvie, Tina and Todd, and we know they are going to relish bringing this much-loved story to life. Cinderella is one of Rodgers and Hammerstein’s greatest scores, and this production with beautiful orchestrations, magnificent costumes and sets, jaw-dropping transformations, and all the moments you love from the classic story will have audiences clamouring for more. Make sure you get a ticket soon!”

New tickets for this glorious and uplifting Broadway production of Rodgers + Hammerstein’s Cinderella have just gone on sale in Melbourne. It is now selling through to 26 June, while the Sydney season is on sale through to 13 November.

With its fresh new take on the beloved tale of a young woman who is transformed from a chambermaid into a princess, Rodgers + Hammerstein’s Cinderella combines the story’s classic elements – the glass slippers, pumpkin, a beautiful masked ball and more – along with some surprising twists. More than just a pretty face with the right shoe size, this Cinderella is a contemporary figure living in a fairytale setting. A spirited young woman with savvy and soul, she not only fights for her own dreams but forces the prince to open his eyes to the world around him and realise his dreams, too.

One of Rodgers and Hammerstein’s most popular titles, Cinderella was written for television, debuting in 1957, starring Julie Andrews, who was nominated for an Emmy Award for her performance. More than 100 million viewers saw the broadcast, more people than any other program in the history of television at the time. Cinderella was re-made for television in 1965, starring Lesley Ann Warren in the title role, Ginger Rogers and Walter Pidgeon as the King and Queen, and Celeste Holm as the Fairy Godmother. A further television remake followed in 1997, with Brandy as Cinderella, Whitney Houston as the Fairy Godmother, Bernadette Peters as the Stepmother, Whoopi Goldberg as the Queen and Jason Alexander as Lionel.

The stage version of Rodgers + Hammerstein’s Cinderella made its long-awaited Broadway debut in January 2013, featuring a new book by Douglas Carter Beane and direction by Mark Brokaw, and it ran for two years. Beane’s book blends masterfully with the musical’s cherished score, with songs including “In My Own Little Corner”, “Impossible/It’s Possible”, “Ten Minutes Ago” and “Do I Love You Because You’re Beautiful?”

Rodgers + Hammerstein’s Cinderella is a romantic and exciting experience for anyone who’s ever had a dream. Waitlist now to be the first to buy tickets at www.cinderellamusical.com.au.