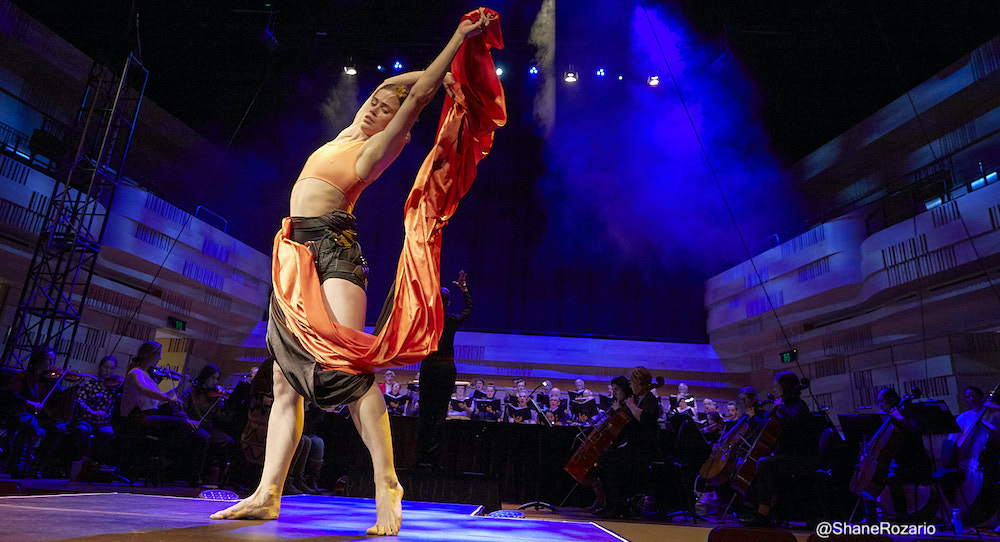 The recent trend of combining symphony and chamber orchestras with modern circus/physical theatre seems like a match made in heaven. It allows circus and dance troupes to engage and perform in more sophisticated artistic themes while also allowing the musicians to present a more physical, dynamic and engaging show for the audience.

This was the intention of Willoughby Symphony Orchestra’s recent production of Above Below with the collaboration with Legs on the Wall physical theatre troupe. This short (one hour) work for Chatswood Cultural Bites was a selection of modern works by modern composers including Arvo Part, Elena Kats-Chernin, Matthew Hindson and Graeme Koehne.

Arvo Part’s opening composition, “Mein Veig” (“My Way”), was a strolling breezy composition that asks for an understated performance by the physical theatre group. Most of the movement was a conventional romantic love story enacted on the forestage that honestly added nothing of significance to the performance.

In the opening works, the idea of collaborating with a physical theatre company seemed a little superfluous, especially when much of the action was grounded on the stage forecourt. It was also an undoubted challenge for Legs on the Wall who had to interpret, create and choreograph a work, and they resorted to several naturalistic tropes of star-crossed lovers and angsty relationships. This was a shame, as the beautiful and airy concert hall seemed like an ideal setting for such a work, and the aerialists were a little under-used.

However, once lead soprano Susannah Lawergren entered, Legs on the Wall transferred their artistry to the air which was undoubtedly their strong point. Until this moment, the physical theatre with its three performers — Isabell Estrella, Anna McCulla and Romain Hassanin — seemed peripheral and dwarfed by the full orchestra.

As each voice soared in the concert hall, the aerialist unveiled a performance that was as lyrical and romantic as Kats-Chernin’s composition. Particularly evocative was when the aerialists presented more abstract interpretations of the music such as the piece that evoked tree branches covered with fairy lights swaying in the breeze.

Kats-Chenin’s “Wild Swans Suite”, with its swirling gothic-infused music, suggested a night time walk in the forest where one expects something fearful, but it all but ends up finding a quiet subdued lit wonderland. The Legs aerialists seemed to relish greater freedom and gave glimpses of how the gravity-defying ability of aerialists can retell some of our more ancient and traditional stories.

Overall, the Legs on the Wall troupe were definitely playing second fiddle to the Willoughby Symphony Orchestra, and it seemed as if their presence was an afterthought in planning this show. This is a shame, as the short aerial performances were certainly eye-catching and capable of giving some narrative structure to what was a loosely connected group of compositions.