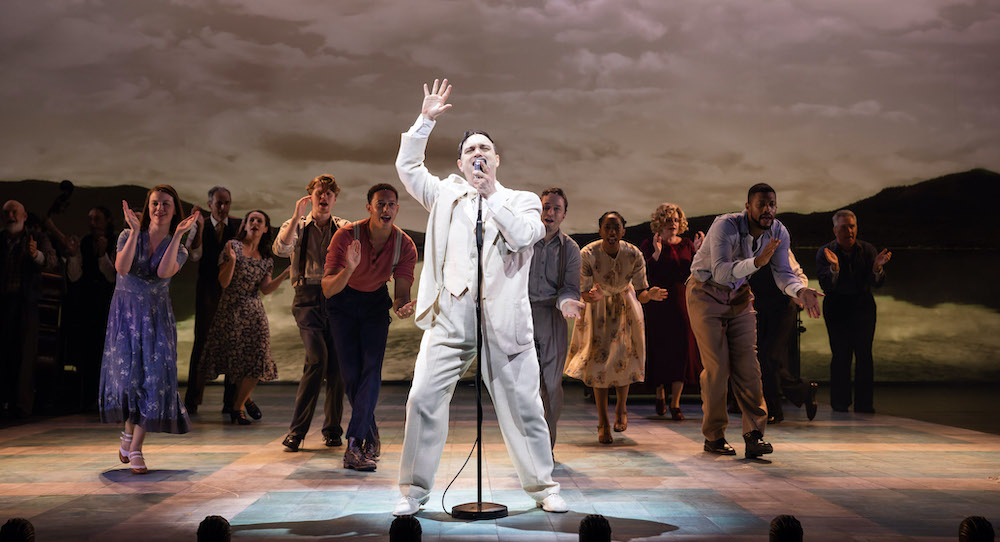 Girl From The North Country opened to a full house at the Sydney’s Theatre Royal after a preliminary run during the Sydney Festival 2022. This production has just come from a sellout season at London’s West End and New York’s Broadway to be one of the most widely critically acclaimed recent musical theatre productions.

Unlike some more recent musicals like Mamma Mia, We Will Rock You and Jagged Little Pill with their biopic structure and lighter pop aesthetics, Girl From The North Country orients its drama toward the more sombre Depression-era setting with its musical heart centred on Bob Dylan’s lesser known songs.

The show is set in a long stay boarding house in Duluth, Minnesota, which allows the various individual stories to weave and intersect with each other. Conor McPherson’s storytelling voice is soulful and full of pathos. His decision to set Dylan’s ’60s era song in the Great Depression gives Dylan’s songs a more sombre and soulful dynamic. Unlike the fast changing and challenging 1960s, the Depression era was an America that was less confident and suspended in time.

Each of the weary travelers make their way to the boarding house, all seeking shelter and a home in a changing, transitory world. Each of these characters embody the dramatic heart of Dylans’ songs, as they are “standing at a turning point in their lives. They search for a future, hide from the past and face unspoken truths about the present.”

The music captures Dylan’s fascination with American folk and traveling blues music with its jug band sound. There is a mix of conventional acoustic instruments like guitars and fiddles that are mixed with the sound of everyday household objects like jugs and washboards. This gives a raw and unvarnished texture to the musical score. Tracy Lynch and the musicians kept up a fast pace with the dancers, Lynch giving it all she had with hair flying and the audience almost standing wanting to join in.

Lucy Hind’s dance numbers throughout the show weren’t especially spectacular, as no one really sees Bob Dylan’s music as sophisticated dance music. Instead, it brings to mind the social importance and intimacy of social dancing in the Great American songbook tradition and also in our lives. This was especially raw, considering how long it has been for many of the audience to have danced socially in the last two years.

Helpmann Award winner Helen Dallimore plays Mrs Burke with great musical versatility, while Zahra Newman plays the central role of Marianne with deft musicality and assurance. It’s always a joy to watch Peter Kowitz as Nick, the desperate proprietor, who fills the stage with much needed gravitas and anxiety. Terence Crawford as Dr Walker was a calm, reassuring presence in a stage that was changing amidst its suppressed anxiety and chaos. And Lisa McCune, as the brash and fragile Elizabeth, was a surprise with the clarity and sensitivity of her vocal performance.

Rae Smith’s scenic and costume design, with its shadowy noirish lighting and faded raw sets, gave the musical a bleak and depressing tone that captured the period perfectly. This stage design, while evocative of the period, sometimes made it hard to see and follow the intricacies of the characters and the meandering storyline.

For many of us, depressing times (like now) brings a desire for lighter, fun and distracting musicals. Maybe that is what’s driving the boom in the nostalgia for jukebox musicals with their reminder of simpler, younger and carefree times. Girl From The North Country seems to take the opposite tack of reflecting our uncertainty and anxiety of the present. It also perfectly captured the struggle for connection and intimacy when we are more isolated and left to our own devices. But like much of Bob Dylan’s work, the central theme is always the quiet unspoken resilience of everyday people. That even as the times change — the Depression era setting, or the 1960s musical score, or our 21st century present — the spirit of human endurance continues.