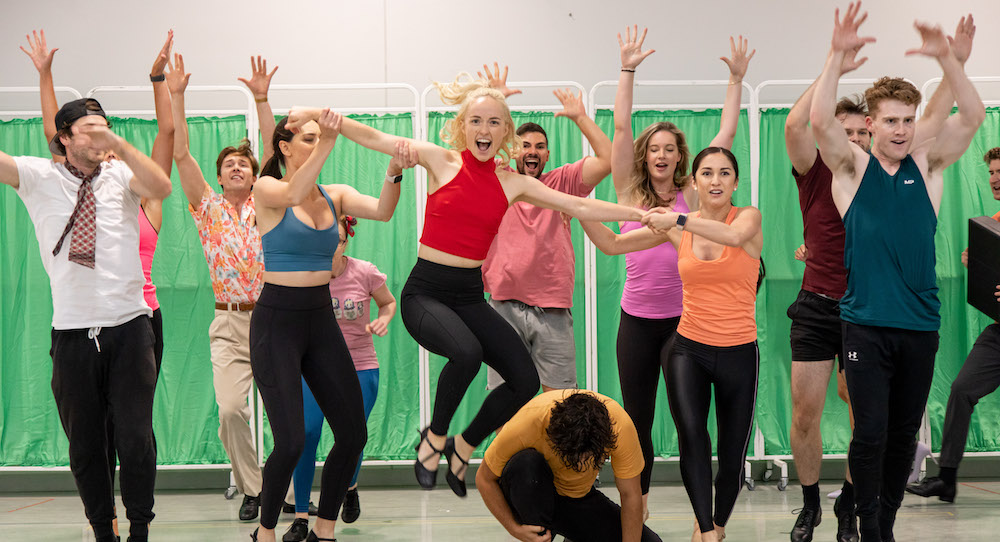 The countdown is on to the much anticipated Australian premiere of 9 TO 5 The Musical, Dolly Parton’s smash-hit West End musical, which will open this February at the Capitol Theatre, Sydney, followed by a limited season at the Lyric Theatre, QPAC, Brisbane from May. Internationally acclaimed and loved by audiences and critics alike, 9 TO 5 is pure gold carat fun!

The musical tells the story of Doralee, Violet and Judy, three enterprising workmates pushed to the edge by their mean-spirited boss, Franklin Hart Jnr. Resorting to wit, comradery and cunning, they dream up a no holds barred scheme to kidnap and turn the tables on their controlling supervisor in the most hilariously defiant of ways.

Dance Informa had the privilege of speaking with Choreographer Lisa Stevens and Dance Caption Emma Hawthorne about their time on the production, prominent themes and conscious processes intertwined within their work.

Stevens is an internationally renowned, Emmy Award-nominated Director/Choreographer with and accolade of global credits and has been recognised by the Broadway World Awards for her work on The Witches of Eastwick, Mary Poppins and Spamalot. Hawthorne, a seasoned performer in musical theatre, has worked on productions such as Wicked (GFO), Mamma Mia! (Louise Withers), West Side Story (Opera Australia), and teaches regularly at Sydney Dance Company. Together, they bring the production of 9 TO 5 to life with strong ideas and pure energy.

Originating from Vancouver, British Columbia, Steven’s dance training was formed upon a strong ballet, modern and jazz foundation, and from this, her interest grew toward the pop music sector. As a performer, she spent eight years in England, where she successfully landed her first musical theatre role in the famous musical, Chicago, on West End. Following multiple accomplishments, she travelled to New York City, where she contributed as an associated choreographer on Bombay Dreams, as well as it’s US tour, and has since spent 17 years working and residing (prior to Covid-19). She received numerous awards and nominations for her work, including Bombay Dreams which was recognised with an Olivier Award for Best Choreography (to its choreographers, Anthony Van Laast and Farah Khan), and a Tony nod for its Broadway run.

After much success on Broadway, Stevens moved on to one of her career highlights where she spent the next six years with Disney Theatrical choreographing the world premiere, and subsequent companies, of the enormously successful Disney’s High School Musical. Following this came the opportunity to work on Dolly Parton’s musical adaptation of 9 TO 5, with tours in both the UK and US.

When speaking with Stevens about the process of bringing the director’s vision to life on 9 TO 5, she describes it as “accumulative.” She notes, “The show has been running for such a long time, and society and communities have experienced immense social evolutions, especially with the #metoo and #blacklivesmatter movements. These movements have influenced how we have moved through the timeline, and added to vision to make prominent female intelligence.”

Reflecting on these themes, Stevens incorporated her ideas of what it means to be a woman in this era, and extended her credentials and trained as an Intimacy Coordinator. From this experience, she highlights, “This really opened my eyes to appreciate gender, diversity and equality, and influenced how I approach my work, and interact with artists.” In such a process, as a choreographer, “you can’t help but be educated and evolve, and that is what the story is, and through this, we learn and teach the audience.”

With rehearsals only commencing back in mid-January, Dance Caption Emma Hawthorne was ready to get back into the studio (that is, all three studios), jumping straight in with rehearsals running from 10am-6pm Monday to Saturday where the show is being pieced together.

With the team’s well-being being a top priority, rapid tests and Covid-19 procedures are all in place to ensure the safety of all dancers, and Hawthorne’s grounded nature and yoga training background brings an element of calm in the way she approaches her team each day. This ensures that the health and well-being of the dancers are sustained, and that rehearsals run smoothly, eliminating stress where possible. She notes, “Singing and dancing with masks on can add a layer of stress, and can be challenging, but we make it happen.”

Having graduated from NIDA, and performing professionally since the age of 19 and with ongoing training in New York, she understands the need to be current and, most importantly, how to approach stylistic challenges. “Every number in 9 TO 5 is so different, and it’s important for us to entertain the audience and lift their energy,” she explains. Starting each day with meditation to anchor herself, Hawthorne says it is imperative that she is centred to also lift the energy of the dancers and artists, so that this can translate back to the crowds to guarantee pure gold carat fun!

9 TO 5 is the quintessential feel-good show for the times, with a sparkling score by Dolly Parton and a book by the iconic movie’s original screenwriter, Patricia Resnick. Be sure to catch it at the following venues below.