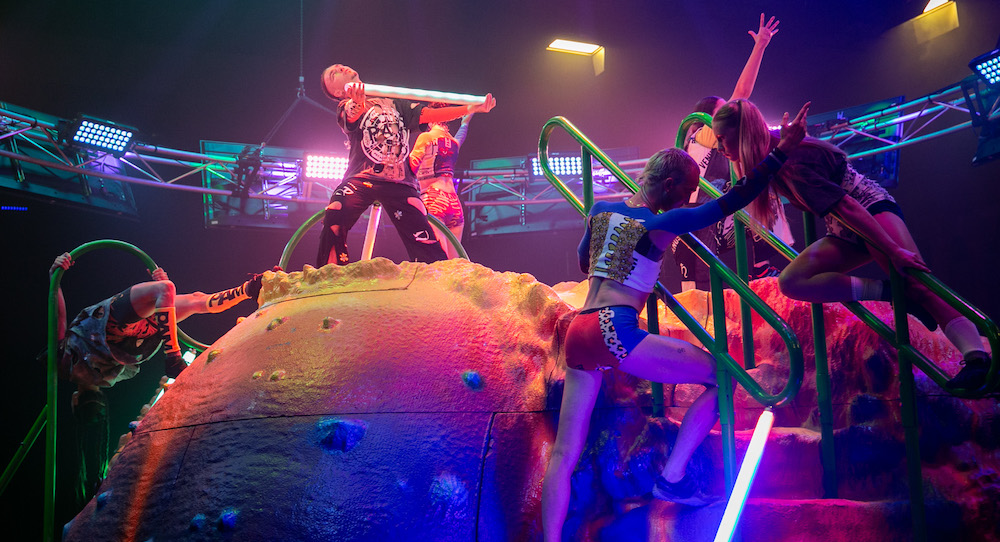 Antony Hamilton’s work has always contained a curious mix of futuristic post-apocalyptic dread that is leavened with a playful and mischievous artistic sensibility. It’s as if he is inescapably drawn to the doomsday themes of the apocalypse but he also wants to stage an epic rave from the debris of our social collapse.

Yung Lung is Hamilton’s latest project as Artistic Head of Chunky Move. It contains the usual range of Hamilton’s obsessions which includes immersive performance spaces, rave, waacking and street dance aesthetics. There are gigantic props – a disordered but saturated technological and media landscape that is populated by a playful array of comic con dancers. He describes Yung Lung as “a hybrid party/performance for the end of days – a rave on Mount Olympus it is… a techno treatise and party prophecy where history is buried under feet that stomp beyond the information age.”

Like Token Armies, Yung Lung eschews the stage-seated audience dynamic for a cavernous warehouse space, with the action centred around a gigantic totemic head that could be either the skull of King Kong or a fallen gigantic statue of post cummunist Karl Marx. Either way, the icons have been smashed and a bunch of feral comic con ravers stand astride determined to have a good old get down in a Mad Max themed rave.

For all their playful comic book styling, the dancers are neither cute or fun loving but give an underlying note of sinister anarchy. Chiara Kickdrum’s sound design and robotic relentless techno provide the soundtrack that feels less like a party building up to a crescendo and more like a drum machine that has been left on a loop and the tapes are on the verge of unravelling with the electric circuits burning out.

While the live action is centred on the giant totemic head, this space is surrounded by a merry-go-round of television screens showing a barrage of images of our online civilisation. The barrage of audiovisual images challenges the audience’s attention, and we find ourselves constantly pulled between the screens and the dancing bodies. The images include cityscapes, Ned Kelly, Japanese anime, military activity, flowing lava and the usual array of contextless imagery most of us see on the news with the sound off.

Despite the power of media saturation, Yung Lung is a demonstration of how live bodies in real space draw our attention and ultimately our empathy. Hamilton’s choreography allows the anarchic energies of his young ensemble to shine through. What seems like playacting at first, soon demonstrates the actual power of play and playfulness, and also how dance is fundamentally a playing of physical forms.

The dance circles around the giant prop, first sceptically uncertain of its danger but then slowly embracing with greater affection and certainty. This street style merry-go-round soon brings to mind the floats of many street parades. Bosco Shaw’s lighting and Callum Morton’s set design immerse the audience in a shape shifting world of dystopian apocalypse mixed with playful celebration, an endless contrast of light and shade.

For all its determination to immerse and disorient the audience in a new and unstable environment, one comes away from Yung Lung strangely optimistic. Optimistic that amidst our foreboding future, human creativity and empathy can still shine through. That even after the apocalypse, defiant visionaries such as Hamilton and Chunky Move will still be determined to create, dance and party on.