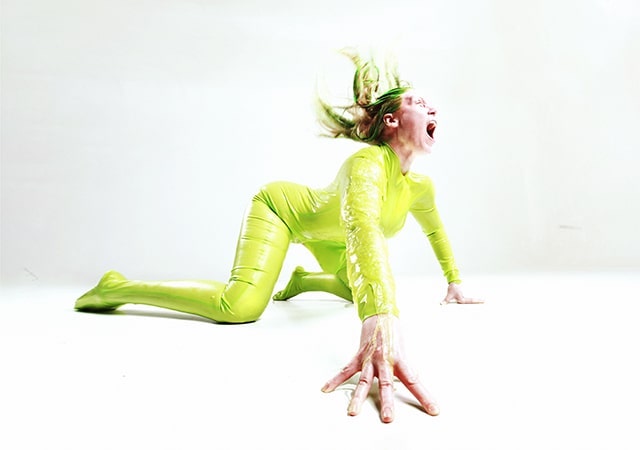 We enter the space, tentative, like early arrivals at a nightclub. Lights, music, no queue at the bar. Our journey begins.

But this is not a night out. This is a zoo. A live exhibit. A naked creature – alien, human – moves slowly. She looks like one of us, and yet is not. As we settle in to observe ‘Edith’, there is an awkward shift. Is this curious other, this alter, a compartmentalised, externalised self? Is this the uneasy voyeurism of the mirror?

Yet, for all this, Holly Durant’s Alter Edith is a readily enjoyable, even humorous work. Its innate strangeness is, like Durant’s alien alter ego, familiar enough in form and content for us not to be…pardon the pun, alienated.

Here, dance interacts with performance art, spiced with the surreal and the grotesque and structured around a simple and intuitive circular narrative. There’s even the comfort of the now de rigueur abstract electronic soundscape.

Although infused with references to avant theatre and cinema, Alter Edith never drifts out of reach. Never gets so alien that we forget it is ourselves we are watching. Edith’s journey of discovery, pleasure and intoxication is ours. Hers is the price we all pay for the discovery of sensation.

However, despite the work being solo, the most telling performance, the key evidence, is that of the quiet, yet manipulative stagehand-cum-zookeeper. She orbits the arena throughout, cleaning up spills and placing cameras. In the audience, we watch the footage on our phones. We cut in. We spy. We are titillated. The power of watching (framing) is ours. Edith is now a public specimen, an object of study. Even when she sleeps, we pry into her business. Tease her apart.

This is perhaps Alter Edith’s core triumph — its perception altering mix of the regular and irregular, the benign and the sinister. The performance, although durational, seems to observe a basic day/night cycle. Durant’s striptease, although reverse (ala, Karen Finley’s A Certain Level of Denial), is also a familiar kind of masking and role playing. And yet, buried in the weave, unsettling echoes of Pasolini’s Salo and Cavani’s The Night Porter. Is this an innocuous dance, a zoological curiosity, or an exercise in perverse and unchecked power? Does Edith shit for our entertainment?

It is a delicious, if disturbing, dichotomy, and gives the show its substance. Without these shadows, it would simply be another evening of post-dance pastiche.

But it’s not all crypto-fascist nightmare. Nor is it merely an indulgent homage to 20th century experimental artforms. It is a well paced and constructed show that combines the stark and the colourful, the abstract and the easily recognisable. As alien as Edith is, when she swoons drunkenly to a woozy and distorted version of Piaf’s Je ne regrette rien she is earthed amongst us. We know this alien well. She is us.

Durant and her creative team (director Maude Davey, sound artist Bensen Thomas and choreographic assistant Gabi Barton, amongst others), have crafted a fascinating fusion of dance, art, film references and sonics. It contains just enough danger to keep us questioning the spectacle and our role in it. Stage or cage? It urges us to ask. Our individual answers, I suspect, may well be the salient point of the exercise.