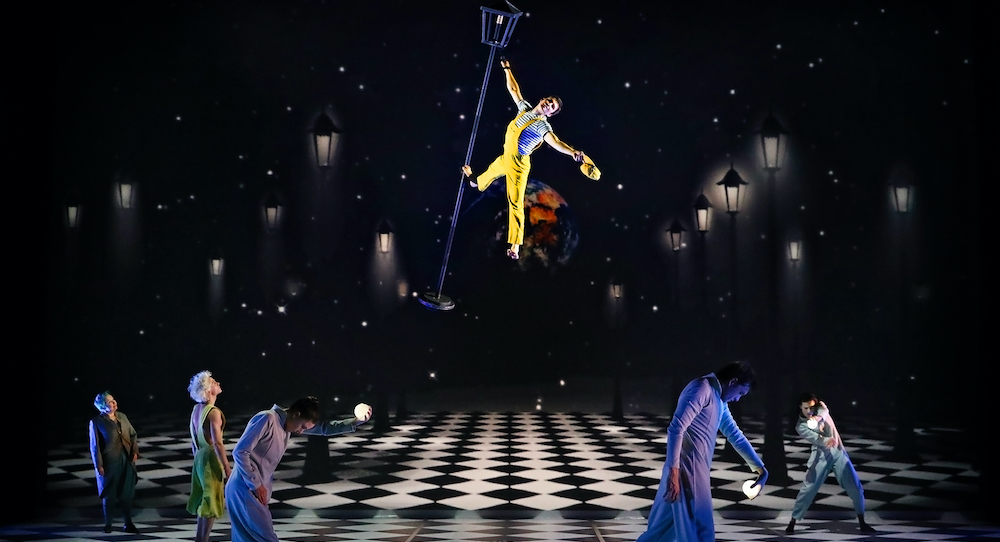 Direct from Paris, The Little Prince has finally made it to Australian Shores after a cancelled 2020 mid-COVID season, and it was certainly worth the wait. Antoine de Saint-Exupéry’s classic 1943 novella has been transformed into a magical stage production of quirky characters, in true French circus theatre style.

There has been much controversy over the years about the meaning of the story, with theories abounding, and many articles and expositions written in publications from The New Yorker through to the ultra-academic and non-literary British Medical Journal. It is French in origin, the quirky playfulness of this genre shining through. It leans into the obvious whilst surrounded with the abstract, presenting many fleeting thoughts amidst one large thread, working together to create something that is easy to watch but subsequently ponder.

Choreographer and director Anne Tournié has drawn on her vast background, which includes work with legendary theatre director of Cirque du Soliel (Cirque) fame, Franco Dragone, to bring this touching yet tormented story to life. It concerns an aviator, who crash-lands in the middle of the Saharan desert, with only eight days water supply within which to fix his plane. He meets a Little Prince who recounts his life story, a journey to various planets with a myriad of inhabitants, all of whom have lost their child-like wonder, obsessed with ‘grown-up’ concerns. The way these characters treat the stars is the connecting idea on each separate planet, and we can draw a new moral tale about our human nature in each part of the journey.

The characters make for excellent theatre, which is where Tournié and librettist Chris Mouron have largely focussed their efforts, weaving in narrative and meaning, a very Cirque style of storytelling. This perhaps led to some of the mainplot not being included, namely the relationship of The Rose to the exit of The Prince from his planet. She is meant to have made the Little Prince so miserable, because she is so needy and self-obsessed, causing his exit from B 612 (his planet). The scene is mostly choreographed, with some moments hinting at this, but it is not obvious that this is why he leaves, and therefore, the story itself does not hold up strongly throughout. It jumps from interesting scene to interesting scene, without the strong thread that usually binds it. Consequently, The Little Prince becomes a show with beautiful segments, with strong individual themes, the Cirque tradition.

When this story was originally written, it had a purpose of protest on the current events (WWII and the current state of French politics). Now when we view it, we can take away the age-old life lessons it shares, and this production inspires us to do so. There is a whimsical edge, with stunning use of colour, and clever choreography. Circus apparatus include aerial straps which are mainly used by the Little Prince, a large ball to stand on which represents the planets, and a Cyr Wheel, which The Drunkard aptly uses.

The performers perfectly embody the contemporary-representing-classic, slightly off-kilter essence of the movement. The choreography, whilst being ultra-contemporary in some places, embraces the French-cirque-quirk style, melding into its own persona. An entertaining crowd favourite were the sheep at the beginning, when The Prince asks the aviator to draw him a sheep. The herd of sheep enter the stage, with utterly endearing humour and cheekiness, incorporating quirky movement – little jumps, leg flicks – and a solid use of contemporary movement paired with theatrics and character. From the opening, they had the audience in the palm of their hands. It was a beautiful coupling of dance, theatre, circus, soundtrack and video that created a well-rounded entertainment piece. The soundtrack (composed by Terry Truck) spoke every bit as much as the movement or the narration, with the video (designed by Marie Jumelin) covering the performance space as if creating the illusion of set, interacting with the performance every bit as much as the live characters did.

Tournié and Mouron give their characters and scenes their own twists – The Vain Man taking selfies with clips showing boomerang style GIFs, The Lamplighter scene channelling Burt chimney sweep (Mary Poppins), The Businessman channelling a Rockefeller era tycoon. The performers came from a variety of backgrounds with a myriad of skill sets, but what stood out is their telling of the story through their movement. They were speaking, not just moving through the choreography. Just as Seth Rigg’s Speech Level Singing is a grounding method used to create an expressive and solid voice, so the contemporary technique drawn on by these performers created a grounded, solid technical dance style that reflects many a modern dance genre. The only let down in choreography was the more than one ‘trending’ movement, without a unique entrance or exit to make it distinctive to this show.

The costumes (designer Peggy Housset) were a lot of fun – they embraced their characters, whilst allowing the characters to embrace them, allowing for freedom of movement and drawing on a variety of inspirations. Bold, bright colours alongside the colourful and busy video ‘set’, almost gave the illusion of watching a high-definition cinema screen. All-round, the design aspects of The Little Prince complimented the other-worldly journey.

Certainly, this telling of The Little Prince stayed with us long after we left the theatre, reflecting on what we saw, learnt and felt. It held up a mirror to our deep selves and asked us to reflect. It was a beautiful and mesmerising production, a story told in only a way the French can – disarmingly thought-provoking – whilst delving into the human condition with conviction. A personal but universal, timeless story.