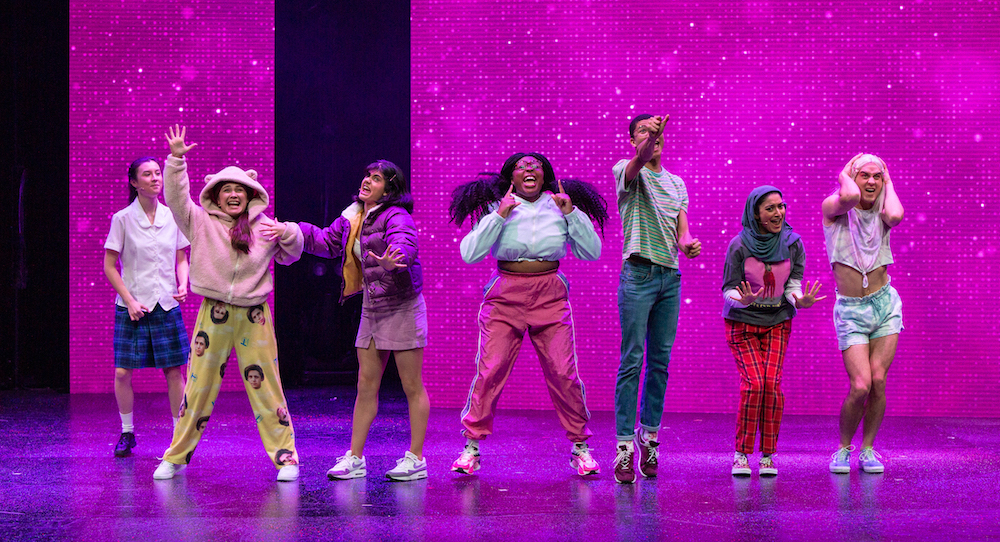 Directed by Paige Ratray, with original vocal arrangement and original musical direction by Alice Chance, Fangirls is a fast paced, hostage-comic-fantasy musical. It has the finesse and hype of an international work, with the delightful bonus of an Australian team, accents and mise en scène.

Eddie loves British pop star Harry. She writes fan fiction about him. He is touring Australia. She can’t afford to go. Despite our protagonist Eddie being a ‘scholarship girl’, she makes some pretty unusual choices. She sneaks backstage and kidnaps him, and hides him in her bedroom to convince him to run away with her. The world he has disappeared from, in particular his fans, is left shocked and grieving. Eddie is saved from humiliation and legal implications by her mother stepping in and assisting Eddie to abandon Harry somewhere he can be found safety.

Fangirls has super casting with a great mix of cultural diversity and mainstream appeal amongst the performers. The artists play many roles and deliver crisp vocal and physical work. The relationships between the main female characters were parodies and on opening night became grating. Whilst purporting to be a feminist reappropriation of young girls interest in boy bands, Fangirls doesn’t go far enough to challenge negative bias of young girls hysteria.

The choreography by Sharon Millerchip satirizes forms of dance universalised by western pop music. There are a couple of appearances of an ensemble of zombie-like young girls, presumably made zombies by their love for the boy bands, and these sequences are hilariously gothic and comic.

At the request of the character of Harry the pop star, the Melbourne opening night saw the audience hold their phones up and wave them in the air during the mock pop concert. The opening night of Fangirls in Melbourne received a standing ovation, proving that the hype of pop music, mixed with teenage spirit, does engender devoted enthusiasts, just not always teenage girls.

Fangirls is largely fun and silly, with a nod to some deeper themes. It is entirely appropriate for young adults. Take your tween or teenage daughter and her friends; you might find yourself having some interesting discussions about stereotypes of girls and young women, about celebrity and the purpose of music.

Fangirls plays at the Playhouse Theatre at Arts Centre Melbourne until 9 May. For more information, click here.