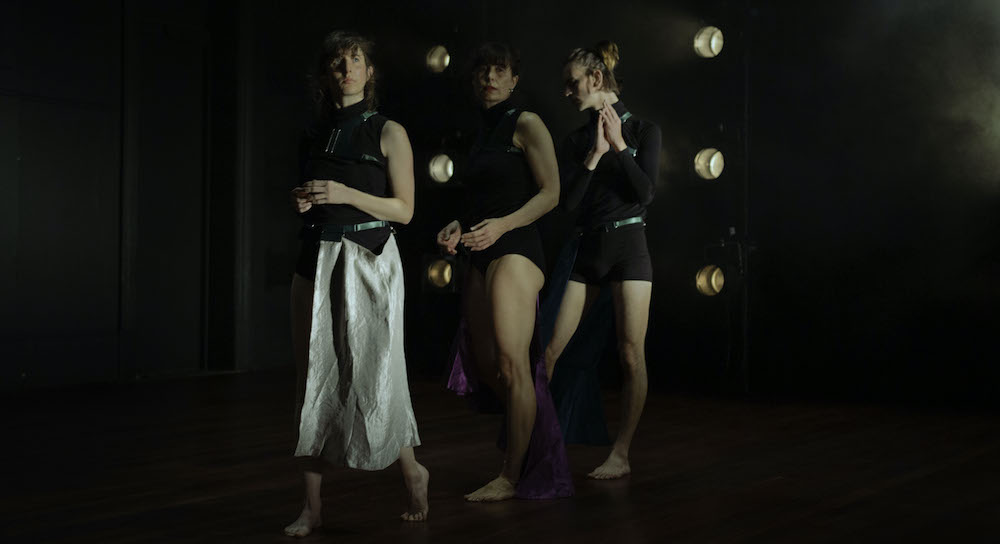 These days, it can be difficult not to look at things through the pandemic prism. At first glance, the title of Deanne Butterworth’s meditative and occasionally sensual new work, Slow Calm Drama, appears to evoke the slowed cadence of lockdown, the eerily becalmed streets and the circumambient, apocalyptic theatre of viral catastrophe. However, it soon becomes clear that Butterworth & Co are investigating deeper and more divergent themes. Indeed, after a year-long onslaught of epidemiology and conspiracy/doom, it is refreshing to see something so avowedly abstract.

Although this tells you more about my state of mind than you likely care to know, it also reveals something fundamental about the work. Slow Calm Drama is a deliberately crafted collision, a dialogue between gentle, imperfectly repeating patterns and a frenetic, catechistic spiral toward an exhausted crash. It is as much a rumination on impatience as it is on the rituals of dramatic construction and the touch points of audience pay-off.

Slow and calm do not necessarily translate as drama, and punters want drama. Conflict, conflagration, conclusion. The manner in which these confections sit at odds with our lived experience is perhaps where Butterworth’s work is best situated. In the fluid space between the mundane and the over-stimulating.

In tandem with Benjamin Hurley and Alice Dixon, Butterworth creates a magic-real realm of ordinary chatter and ritualistic transformation. As such, Slow Calm Drama appears to belong in an unsettling world, where crisp technique and jagged energy juxtapose. We wonder if we are watching mistakes or high art. Here again, this maybe a conscious mismatch, a way to disrupt the smooth arc of our watching.

But it’s not all broken lines and post-modernity. The work is quite stylised, at times recalling the photographs of Helmut Newton and at others the subterranean world of goth clubs. In this, we detect the sizzle of the sexual ceremony, the reveal/conceal momentum of dancing bodies. Thus, the abstraction is somehow re-integrated into the visceral, the ideal rendered animal.

Here perhaps is another window on Butterworth’s thinking. The work is slow, calm and dramatic. It cycles through tension and release, like a classically organised plotline, toward a howl of revelation, before fading slowly into a coda of post-crisis sleep.

While fair to concede that Slow Calm Drama is neither form-busting nor choreographically mind-blowing, it is likewise reasonable to suggest that it achieves what contemporary dance often does well, which is to offer us a non-literal keyhole into ourselves and the way we relate, physically and otherwise, to the core contingencies of time, space and other. It may not be as dramatic as a global outbreak, but in its calculated smallness it serves to remind us of the part we all play in the pre-fabricated spectator culture of 2021. Seriously…how much more drama can you handle?