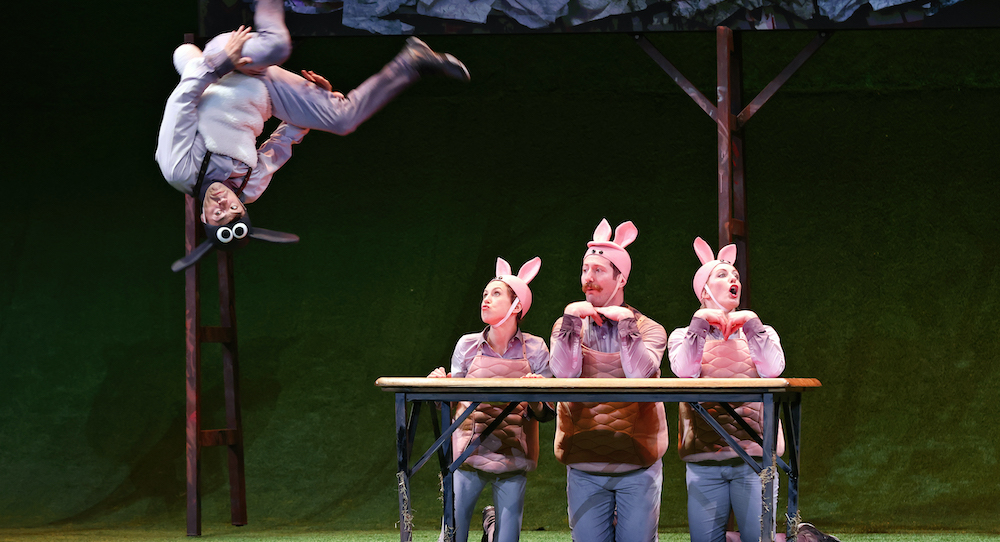 Brisbane’s Circa is back with a show for preschool and primary kids. Director Yaron Lifschitz and the Circa ensemble have crafted a contemporary circus show inspired by the characters and creative vision of Shaun the Sheep. Shaun the Sheep is a claymotion brand broadcast in 170 territories around the world created by animation studio Aardman. Shaun the Sheep first cameoed in Aardman’s other famous work, Wallace and Grommit, before graduating to a series of its own.

Circa’s Shaun the Sheep draws on the screen basis of the original by featuring blends of live film (film recorded as the performance occurs and projected live) and pre-recorded elements. The sheep create a live broadcast of a circus show which is streamed into the farmer’s house. Despite this filmic layer, the show is most playful in the interplay between the realities of the sheep and the farmer. The sheep pretend to be passive and timid beings in front of the farmer when in fact they are proposing to one another wild and hilarious antics and challenges. Much slapstick arises from their need to be considered passive by the farmer. The filmed elements, though, are appealing for the digital natives in the three- to nine-year-old set, for whom the work is designed.

Circa has a reputation for excellence, and Shaun the Sheep definitely delivers: dazzling, slick acrobatic and juggling sequences; clever silks and swing work; crisp movement sequences including a tango performed by, yes, performed by sheep. So crucially important to the age bracket is the clowning aspects. Every character in the circus version of Shaun the Sheep is a clown in some way. The sheep are clowning even as they are involved in each of the circus skills and acts.

Dan Potra’s scenic design is delightful and an extremely successful adaptation of the concept for the purposes of circus. The entire backdrop of green rolling pastoral landscape is actually vertiginous slide that the performers run up and tumble down. It is used like a trampoline wall at a trampoline centre or a wall in a skate park.

Circa’s Shaun the Sheep is a two-act spectacular smorgasbord that will have your grandkids enthralled at the possibilities of physical theatre and dancing down the street on the way home. It’s on in Melbourne at the Regent Theatre from 14 – 18 April. You can catch it next in Woolongong at the Illawarra Performing Arts Centre from 19 – 23 May.

For more information or to book tickets, visit shaunthesheepcircus.com.au or marrinergroup.com.au/shows/shaun-the-sheeps-circus-show.