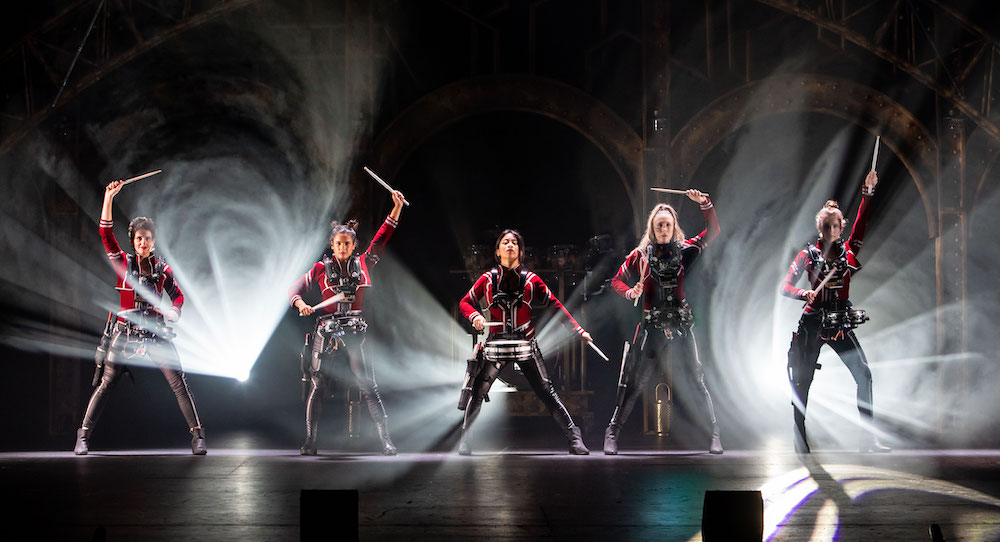 Drummer Queens is an original all-Australian theatrical show created and composed by Joe Accaria. Featuring the talents of eight female performers, Accaria is looking to shift perceptions of drumming being a traditionally male-dominated artform, taking inspiration from female artists that he idolised as a kid, including Sheila E, Cindy Blackman and Karen Carpenter, along with more recent influences of a new generation of female drumming talent, to bring together an all-female cast in this entertaining, rhythm-filled 80-minute production.

Taking place in a post-apocalyptic world, the set is a polished industrial playground. It contains scaffolding, drum risers and copper pipe arches that resemble the curves of a drum kit. With production design by Adrienn Lord and Richard Neville, this beautiful meccano style set allows the performers to move different segments of the set around the stage to create new and interesting formations throughout the show. In Drummer Queens,, the performers not only showcase their skills across different types of drums and percussion instruments including the traditional drum kit, cajon, bass drum and electronic drums to name a few, but they also interact with the set, using their drumsticks and hands to create rhythms and percussive beats when striking the scaffolding. With two full drum kits perched high on risers positioned on either side of the stage, the performers interchanged between different drums moving swiftly around all areas of the stage. The moveable set pieces at times gave the audience a 360-degree view of the performers in action where they stood on solo moving platforms while playing the drum and kick drum. This really showcased how multi-skilled these performers are to be able to play the drums while balancing on moving platforms and still not miss a beat.

Also reflecting the industrial style of the set is Lord’s costume design. With an individual look for each performer that included bright yellow overalls, white top, black army boots and harnesses that included a holder for their drum sticks meant the performers always had a spare drum stick on-hand no matter what drum they were playing next or where they were on stage. Later in the show, the performers wore a more uniform look with steampunk military jackets in red and leather style pants for a striking, fierce, feminine style.

While there is no dialogue or storyline, this show is driven by a variety of rhythmic percussion styles combined with movement that gives each performer the platform to let their unique talent shine. Of the eight performers, there are two dancers. Georgia Anderson is Bey-B and brings her hip hop grooves, incredible acrobatic flips, bubbly energy and percussion skills, as well as being the comedic relief. She is an all-round entertainer. Tap dancer and choreographer Peta Anderson as Freedom performed an outstanding tap dance solo demonstrating that complex rhythms are not only created using your hands but also your feet. Not shying away from the more difficult tap steps requiring skill and precision to execute, Peta showcased her crisp clean fast beats and added an extra layer of complexity playing rhythms using drums and symbols and echoing these rhythms with her feet, which was a unique showstopping moment.

The incredible drummers in the production are Stef Furnari as Rebel, Niki Johnson as Switch, Salina Myat as Zen, Lisa Purmodh as Sass, Claudia Wherry as Luna and Ned Wu as Cap. Furnari performed a solo using a unique electronic drum to create a range of different sounds all while elevated in the air on a riser that rocked like a see-saw from side to side. As well as solo moments, it was enjoyable to see the performers work together. Wu and Wherry were impressive showcasing their Taiko drumming skills, beating both ends of the drum with accuracy at lightning speed. The ensemble moments when the cast worked together showcased a sense of unity, comradery and respect. In one piece, four performers all created mellow percussive sounds with their hands against the drum skin of a large bass drum. The lighting by Neville amplified the puppetry and silhouette effect of their hands as together they produced percussive sounds. Working as an ensemble, Swinging Bass Drums created a ‘wow’ moment that required careful choreography and timing. Three large bass drums all suspended from above swung like pendulums from side to side, requiring the performers to catch and play these large drums with exact timing.

Drummer Queens is a wonderfully entertaining percussion show that demonstrates what can be achieved when eight talented females collaborate to showcase their love of all things rhythm.

Drummer Queens will play the Comedy Theatre Melbourne 28 April – 8 May, and Lyric Theatre at Brisbane’s QPAC 11 – 18 May. For more information, visit www.drummerqueens.com.