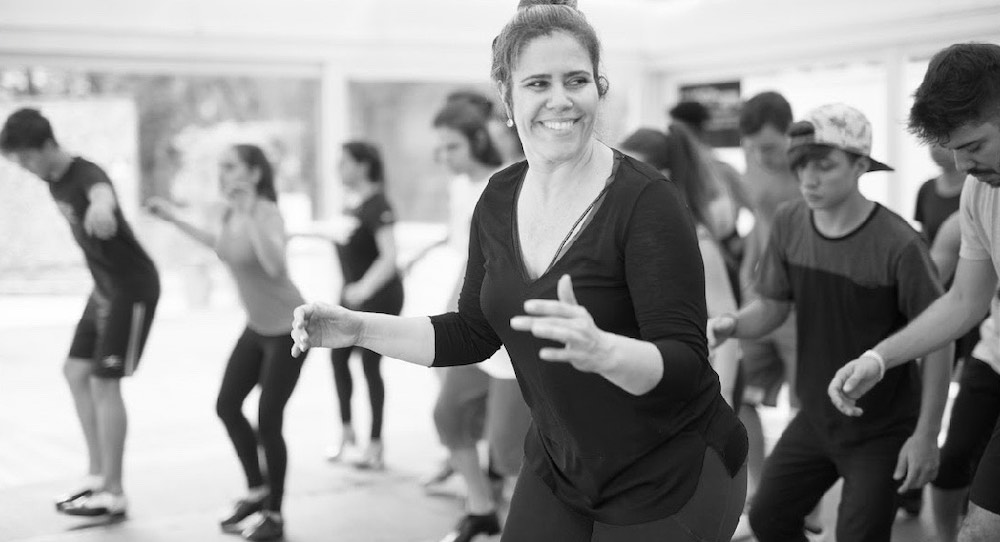 What a year to turn 21. Yet, when you are as committed and determined as Christiane Matallo, the advent of a pandemic and the imposition of social and travel restrictions only serve to sharpen your focus and drive your creative response. Thus, like so much this year, the globally renowned Brasil International Tap Festival, sponsored by Só Dança, is going digital.

Speaking from her home in São Paulo, the woman once dubbed ‘the Carmen Miranda of tap’ reflects on the disruptions and opportunities of 2020. “I thought, I have to do this, because I don’t have an idea how long the situation is going on,” she says simply.

Indeed, having put so much of her life and talent into developing the festival, this year’s 21st iteration was always going to happen. “The financial conditions are horrible,” she adds, shaking her head, “especially in Brazil because our currency is crazy right now. So we did a big deal between all the artists so that we can make it a success for everybody involved.”

The re-configured online Brasil International Tap Festival, which goes live on November 9, will be a week-long tap intensive, featuring over 70 hours of classes and performances. Luminaries like Jason Samuels Smith and Claudia Raia will join teachers and choreographers from across the Americas, Europe and Australia.

As others in the dance world have done, Matallo has grappled with the issue of going online. In spite of its flexibility and portability, the screen can never duplicate the physical and social presence of dance. “But it would be irresponsible of me to do something when people could die,” she observes, a point perhaps more pressing and poignant in Brazil than elsewhere. “I have been going 20 years, now 21, so now I can connect more people, amazing tap dancers; and I can work with people that I really like.”

Indeed, her profile in the tap scene is such that she was able to pull together a global roster and reach out to dancers across the planet, ensuring that the festival would deliver value, even through a screen.

One such dancer is Australian JW Murray, the director of the Sydney Tap Festival. Having originally planned to be in São Paulo for the festival, he is nonetheless keen to play a part in one of tap’s biggest annual events. As he explains, “I think what’s great about dancers is that we’re hungry to keep things going. Artists always find a way; but with how I see the Brazilian event being run, all online, obviously there are issues, but no matter where you are in the world, you can do my class or Chris’s class or Jason Samuels’ class. Normally, you wouldn’t have that opportunity, so there are massive possibilities.”

Having just staged the re-scheduled Sydney event in October (in person, rather than online), Murray has a keen sense of the issues inherent with virtual dance. “No one really knows what’s down the track with the technology,” he notes. “Is this something that people are going to be asking for in future?”

Yet, for all the uncertainties surrounding digital platforms and contagious diseases, Murray and Matallo are sure of one thing. As the latter declares, “Tap is about yourself. Who are you? It is more than an artform; it is a philosophy. It came from African people in the United States, and it’s about how you can express yourself through the body, using the body to make sound. It’s music. You are the percussionist, and you are dancing and acting all together.”

Tap, unlike most other forms, embeds the music in the movement. “You are the music,” Matallo states boldly. “For me, it’s about time and space.”

“There’s no right or wrong, and that’s part of what makes tap such a fantastic genre,” says Murray. “The way I tap, and choreograph and teach, is quite different from a lot of the common or traditional styles. My thing is very much a dance thing, and very much based on lateral movement, but still having the focus of rhythm and timing and coordination. So, it’s not so much a Broadway style, as making the tap dancing.”

That said, tap is rooted in Afro-American musicality and often overlaid with a Broadway aesthetic. In this, it combines elements of folk tradition and polished theatrical technique. As Matallo prefers to say, “We think about the articulations and not just about shapes.”

In 2020, though, tap has travelled far from its birthplace in Black America. The worldwide appeal of the Brasil International Tap Festival and of Matallo herself are symbolic of its globalisation. “Of course, there is a technique which is a beloved artform for Americans, so when it comes to Brazil, we have to respect the history and tradition,” she argues. “But the technique can let you bring other things. For example, I can put in elements from samba, but it is very important to be faithful to the technique. You need to be clear with your sounds and conscious about your whole body.”

Starting November 9, the Brasil International Tap Festival will stream dozens of hours of tap inspiration for thousands of fans and students. They may well be geographically dispersed, but, thanks to Matallo’s sheer determination and the convenience of distance crushing technology, the world’s tap dogs will doubtless run as a pack once more. Yes, it will still be a 21st party…just 2020 style.

The Brasil International Tap Festival will be held from 9 – 15 November. For more information, visit en.brasiltapfestival.online.