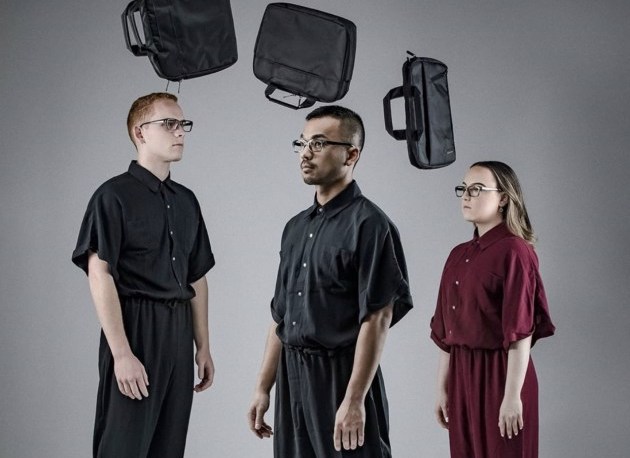 PAUSE? This work from LOcREaDO Dance Company is so full of relentless energy you are exhausted just watching it and don’t have a chance to blink! The cast of 13 are incredible.

The lighting is an integral, essential part of Pause which becomes a necessary defining structure for the cast. Isolating squares of light are used, sometimes singly or as a massive grid. There are also snappy blackouts, a use of silhouette with a column of light at the back of the stage and, at times, red or blue washes of colour.

The set, designed by The Combination Production Team, is sparse. Every so often, a single black desk appears and is used dramatically at various points, some of the cast sliding on top of, under or around it, and at one point it becomes an Outsider vs the Group focus. Headphones and briefcases are used by the dancers with refined grace, again indicating individual isolation. Free flowing, easy-to-move-in costumes are in burgundy, black or grey. For most of the work, the cast are barefoot but for one section wear a single sock rather than a pair.

Pause is coldly abstract yet boiling underneath. There are fragmentary solos, duos, trios and quartets that are woven in and out of the emphatic unison ensemble work.

In the second half of the work, there is a rhapsodic pas de deux danced by Raegan Williams and Aaron Matheson. The duet combines almost violence with tenderness, a depiction of an argumentative relationship, veering between almost apathy and tenderness before parting with somewhat bitter remoteness. Understated gestures indicate their now cool detachment. Both display superb technique in a fluid performance.

The intimate space of the Playhouse Theatre is splendid for this sort of enveloping piece, and the dancers used every bit of it. In Malcolm’s abstract narrative, he chronicles the unexpected meeting of a man and a woman, both victims of COVID and the overuse of modern technology, who discover each other by halting for a moment to pause, encouraging the audience to wonder, “What if?”