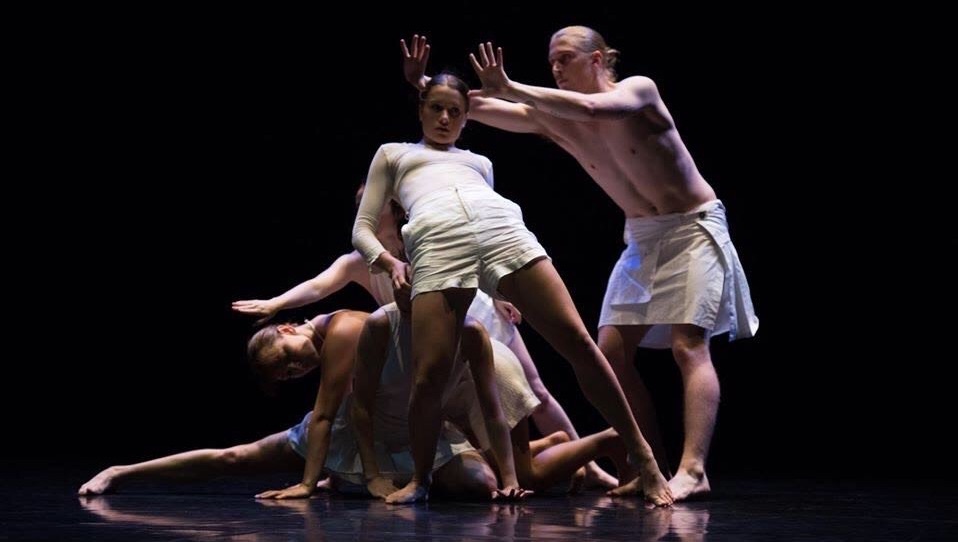 Catapult Dance, Newcastle’s professional dance company, presented its much-anticipated mixed bill at the Monkey Baa Theatre, as a part of the March Dance program for 2020. Four of Australia’s most exciting independent dance artists, under the curation of Catapult Artistic Director Cadi McCarthy, premiered original work in this season. Omer Backley-Astrachan, Craig Bary, Adam Blanch and Kristina Chan made for a delightful night of unique and thought-provoking work.

Blanch’s work, Trip For Biscuits, was an exploration of the subconscious of a scattered mind. With an extensive performance career, and a growing body of stunning solo and student works to his name, this is Blanch’s first attempt at a work of this nature and audience. The movement vocabulary was rather explorative and intriguing, with many themes popping up throughout and moments where there was potential for deep exploration. Branching away from his typical style, this was a solid attempt at a new genre. Many interesting ideas were explored; however, none of them successfully came to fruition. Being rather vague in description and lacking in clear direction, structure and exploration of a solid thread was the biggest downfall of the work. Without a clear thread, the work continued to jump from idea to idea, never quite solidly forming something to go away with, from what gave hints at calisthenics or other sport in wartime, hinting at youth aesthetics circa Germany 1940, to hints of Cabaret, which perhaps have come subconsciously out of the studio process, there was a lack of clear dramaturgy. It is a wonder if these themes were intentional; certainly they were present regardless but did not point to the cycle of chaos so much in an intentional way. It just happened to be that the work itself felt chaotic and disconnected, although not through mindful planning. The costuming, red ’70s style shorts and white singlets, with white striped red socks, was quite cute, added to the theatricality of the work. Some moments may have been served as better on film. Despite getting lost at times as to where the work was going, there was some unique movement exploration and captivating moments, a solid start to creating works of this nature for Blanch.

Backley-Astrachan’s work, Human Remains, focused on a post-apocalyptic theme, where out of the ashes, we as humanity can rise again, exploring the concept of surviving where no other have, and beauty and grace from ashes. There where whiffs of the mythological, presented as a retina of images moving through the work. Animalistic tableau gave resemblance of something familiar, moving into exploration, and sitting in the moment as the dancers wove their way through and developed the idea, whilst morphing from idea to idea. There is a subtle beauty, even in the obtuse, in Backley-Astrachan’s work that pervades the whole work — from the way partnerships are transitioned, to the shapes themselves and the detail within, to the consistent return to motif, which makes for satisfying viewing. There is a brilliance to the partnering work — limbs work sympathetically so that the duo easily slides into a trio or slips into a group encircling each other and then moving into interacting in a completely different manner without the audience being particularly aware of how we got from one to the other. Use of perhaps Hebrew, albeit non-English language, was an interesting feature, with one woman shouting it out as if in countdown, adding the intrigue of the work. Backley-Astrachan knows how to create a world for the dancers to exist within, and the audience is drawn in. It would be good to see him create this world to include the audience, extending its reach beyond the fourth wall.

Chan’s work, Shimmering Towards Silence, focusses on the concept of human attachment to nature, and our destruction of nature in that attachment, a consistent theme in Chan’s body of work. Delicately intricate, and decidedly slow, there is a brilliance to Chan’s choreography, born out of years of thoughtful honing and a body of experience, that the dancers were not quite able to capture. The need for definite form and shape typically seen in a young dancers’ expression, and the general inexperience of youth and inability to get out of their own headspace, takes away from Chan’s work, melding her work toward something that was perhaps beyond the grasp of such a young cast. Details and intention are lost. Chan really does create the unique, is not afraid of her own voice within her work, and the exploration that lies within creating individual works that are a piece at a time of the whole picture.

Bary’s work, Laden Blue, was also an exploration of the journey of the earth and our interaction with it. This did not so much carry across in his work as did the theme of abuse of women, devoid of clues as to being about earth. The work started off quite interestingly, with doll-like movement and accompaniment that could have gone somewhere quite interesting but, unfortunately, went everywhere predictable and typical. Laden Blue had a filmic quality, which conjured a Stranger Things aesthetic – in costume and in sound. There was use of singing of a woman as if in a bar who experiences a smearing of black paint/ash-like substance on her face, notably by the males, pigeonholing the gender roles. Had these been reversed, perhaps the meaning and interest factor could have been heightened and created a sense of intrigue in the story. It was nice to see a strong burst of a solo from Alexandra Ford near the end of the work, technically and dynamically executed; however, none of the vocabulary was new, or truly connected to any exploration of the theme. It was the typical explosive contemporary tumbling we see in most every work these days, signalling victory in some way, but she emerged not entirely victorious, still smeared and damaged, reminiscent and perhaps a little too close to home with the recent tragedy of bushfires and DV burn victims. It would be good to see Bary push his own boundaries, go beyond the first layer of a theme, and explore the depth of his ideas. He has all the potential to do so, and bring something quite unique to the stage.

Overall, four unique works were presented, and what an opportunity for this young cast to be involved with such experienced choreographers, to workshop with and create new work at such a high standard. They are a young group, with many years of learning ahead of them to truly find their voice, but what a wonderful and exciting entity Catapult Dance is, and what they are bringing to the independent dance scene in their home base of Newcastle, and beyond, is very special.