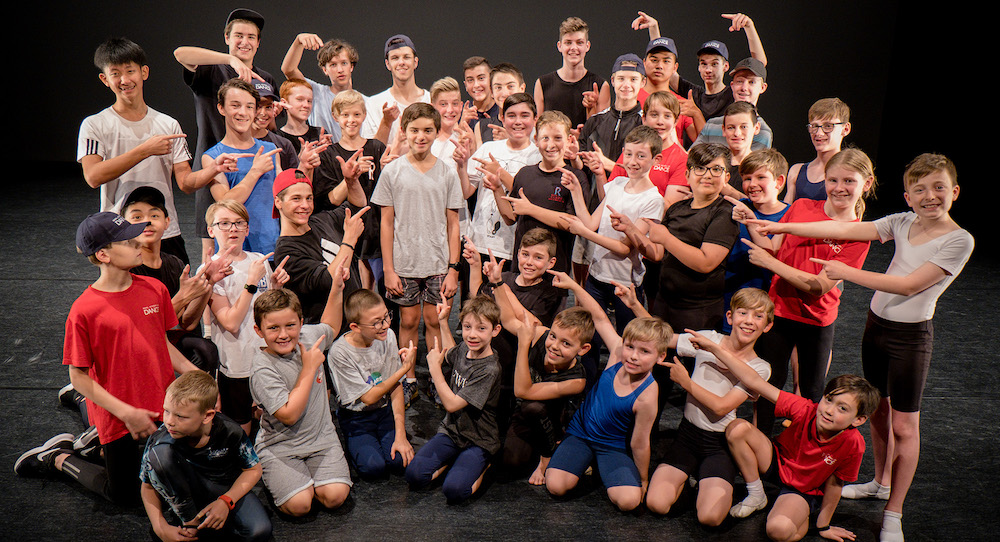 The Royal Academy of Dance (RAD) is celebrating its 100th birthday in 2020, with 100 events in 100 places globally. The first of these events took place in Adelaide in early January, and thrust young male dancers into the spotlight as part of the RAD’s global male dance initiative – Project B.

Project B was launched in 2017, as a direct response to significantly lower numbers of boys taking part in the global dance educators programmes and exams syllabus. The RAD committed to a three-year initiative (2020 is the end of that three-year period) to provide more access and opportunities for male dancers and male dance educators. RAD’s Australian office launched the initiative here with Boys DANCE 18 in Adelaide in January 2018 — a two-day open dance workshop with an all-male faculty utilising the expertise of professional dancers in ballet, tap, contemporary and hip hop. The Boys DANCE workshop has run every year since and is open to male dancers from ages seven and over from beginners to advanced.

This year saw 40 boys from across Australia and from as far afield as Malaysia take part. In celebration of the RAD’s centenary, Boys DANCE 20 included a special competition or ‘Challenge’. This challenge gave male dancers the opportunity to perform a solo dance in a genre of their choice in front of a live audience. The Challenge was adjudicated by the RAD’s Artistic Director Gerard Charles, who was visiting from the UK to preside over this very special event. With prizes up for grabs from dance brand sponsor Bloch, and scholarships to the 2020 Victorian Dance Festival, the boys were able to hone their solo with the support of Boys DANCE 20 faculty. Those boys taking part in the workshop who did not wish to compete were invited to come along and show their encouragement for their peers during the Challenge evening of 4 January. The general public were also invited to come and watch as part of the RAD’s commitment to normalizing the subject of male dance for society.

The faculty for Boys DANCE 20 included classical teacher Jake Burden, founder of the organisation, Ballet Brothers, which gives boys the opportunity to dance, network and share experiences. Dancing brothers Jesse and Joel Rasmussen taught tap and hip hop, respectively. Jesse is most known for his role as creator, performer and producer of hit show The Tap Pack touring internationally, whilst Joel spent his professional dance career performing with some of the biggest names in pop and choreographing for shows such as The X Factor and So You Think You Can Dance.

The students were surprised during rehearsal for a parent showcase on Saturday afternoon by a visit from Wade Neilsen, a RAD student currently playing the role of Billy Elliot in the national tour of the musical of the same name.

The Challenge competition participants were grouped as Junior and Senior levels, and the winner for the junior section was Seth McInnis from Dance Explosions, a regional South Australian school in Port Augusta, who performed a hip hop solo. Runner-up in the junior level went to Leo Cocks from ACPA in Adelaide for his Beatles tap solo, with the encouragement award given to Lucas Projkoski from Point Cook Performing Arts in Victoria for a classical piece.

In the senior level, the winners prize went to Joe Dufty from National College of Dance in Newcastle, NSW, and runner-up Lachlan George from Mildura Ballet and Dance School in Victoria. The encouragement award for the senior boys went to Daniel Maxwell from Innovate Dance Studio in Adelaide for his beautifully choreographed contemporary solo.